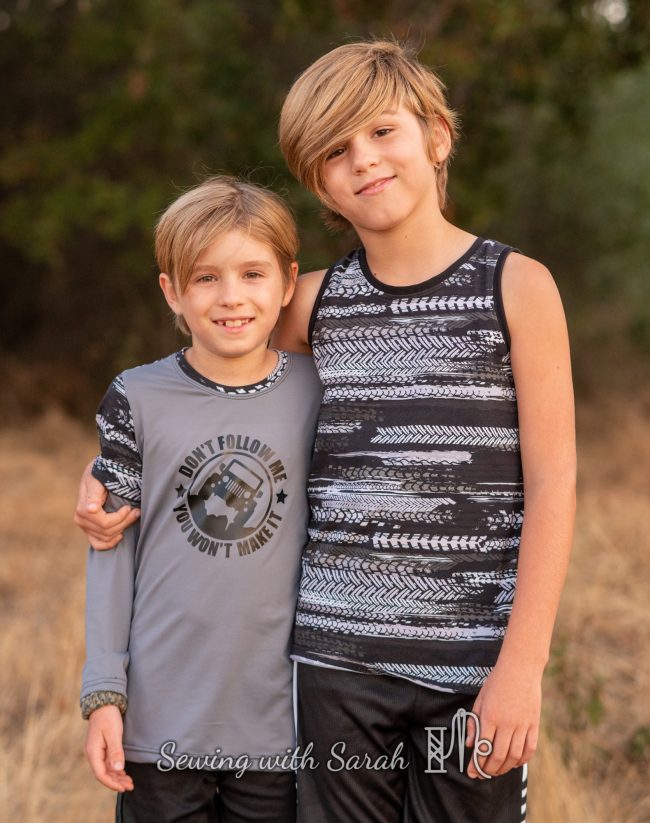 My twin boys celebrated their 9th birthday this week!

In truth, I didn’t even try to get this blog post written in time for their actual birthday, because I knew it wasn’t going to happen- the third week in September is home to no less than 6 birthdays in our immediate family, including my own (which I’m usually too exhausted to celebrate by the time we get through the other five!).

Still, I wanted to write a short post commemorating their last year in the single digits, because these two are awesome, and I love the chance to look back (and forward!) as we celebrate the amazing young men they’re becoming. Along with all the usual birthday hoopla (crepes in the morning, donuts at their class, choice of dinner, presents, lego party with family and friends, and lots and lots of cake and ice cream), it’s become a tradition (since I learned to sew when they were two), to make them a birthday shirt. 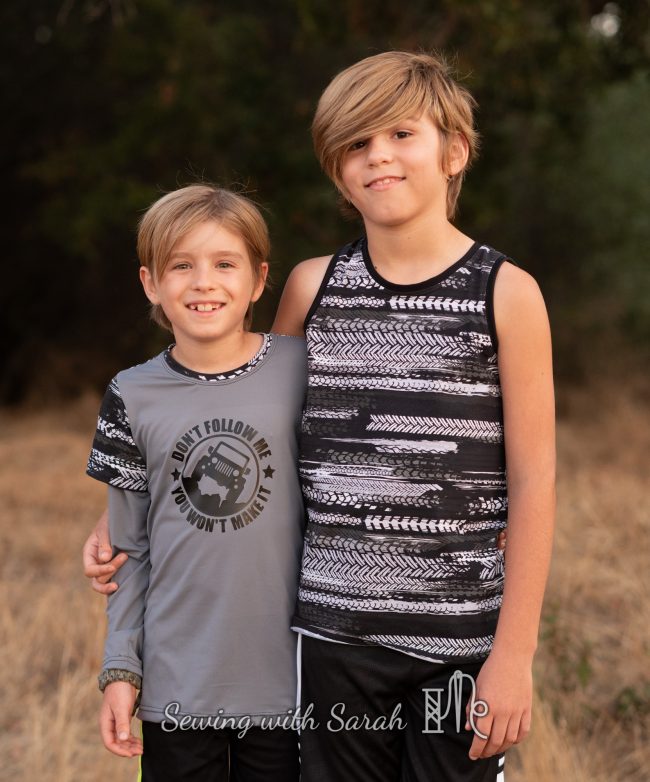 When they were younger this meant a tee with their age appliqued onto it in their favorite character fabric, but as they’ve gotten older and more sophisticated, the job has gotten tougher. In general, they tend to prefer solid fabrics these days, but when I saw this “tire tracks” fabric from Peekaboo, I knew I’d stumbled on something they’d both love and wear. In fact, it made a perfect little birthday “teaser”, since their main gifts from us were rock crawler RC trucks- something that’s been on their list for over a year. I gifted them these shirts the night before the big day, and the nature of the “hint” was the subject of much excitement and anticipation for the next 24 hours.

For Oliver’s shirt, I used the classic Jalie 2918 “men’s t shirt” pattern that I’ve made about a million times- it’s a solid workhorse in my collection, but oddly I had never tried the double sleeve before, so I decided to give that option a go. 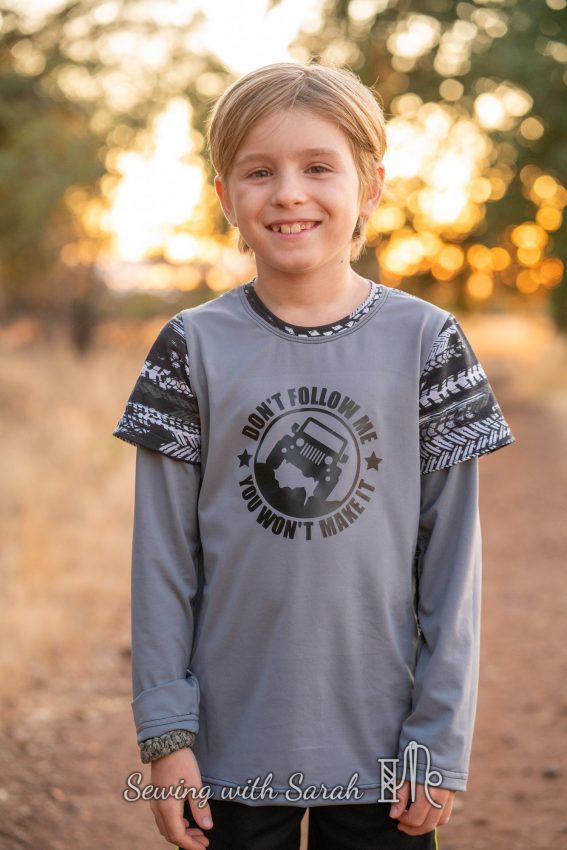 I used a lightweight athletic knit from my stash for the front and under sleeve, and the tracks for the sleeves, neckband and back. I had assumed, based on the RTW tees we have in this style, that the instructions would be for a faux double sleeve, but they actually direct you to cut two sleeves (one short, and one long), and attach them as one at the shoulder, so lightweight fabrics are a must. 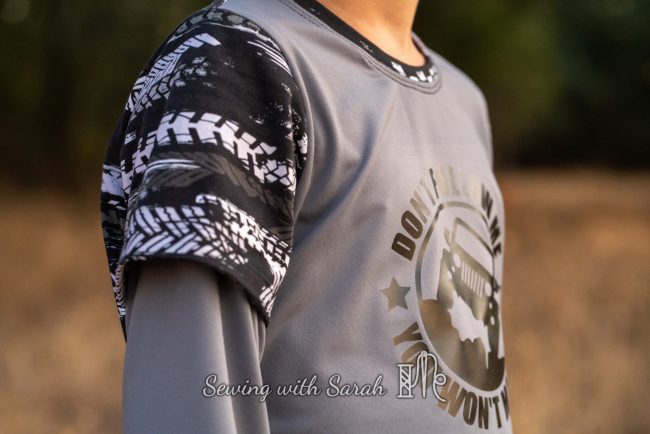 Oliver has some sensory issues with his clothing, and really doesn’t like it when things are close to his neck, so I scooped out the front a bit for him this time. I’ve noticed him pulling at it significantly less than he usually does, so I think it was an improvement, and I’ll probably take out another 1/4″ on my next version.

Since I used a solid for the front, I had the opportunity to add a little graphic with my silhouette machine- and I thought this one suited Oliver’s personality perfectly. He’s my most adventurous, fearless child, and I really admire his tenacity for life and willingness to try just about anything. 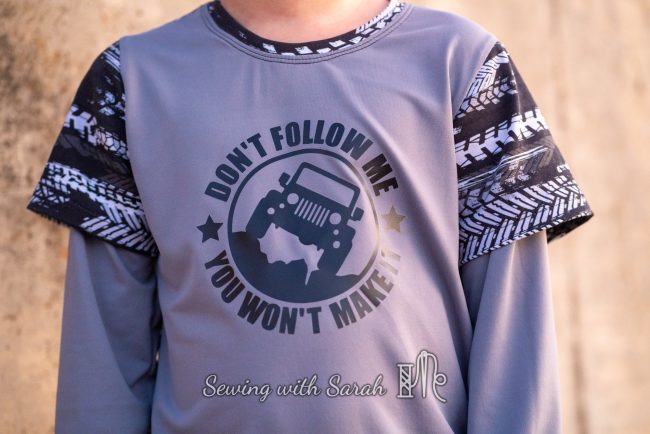 See what I mean? I am NOT looking forward to his driver’s training days… 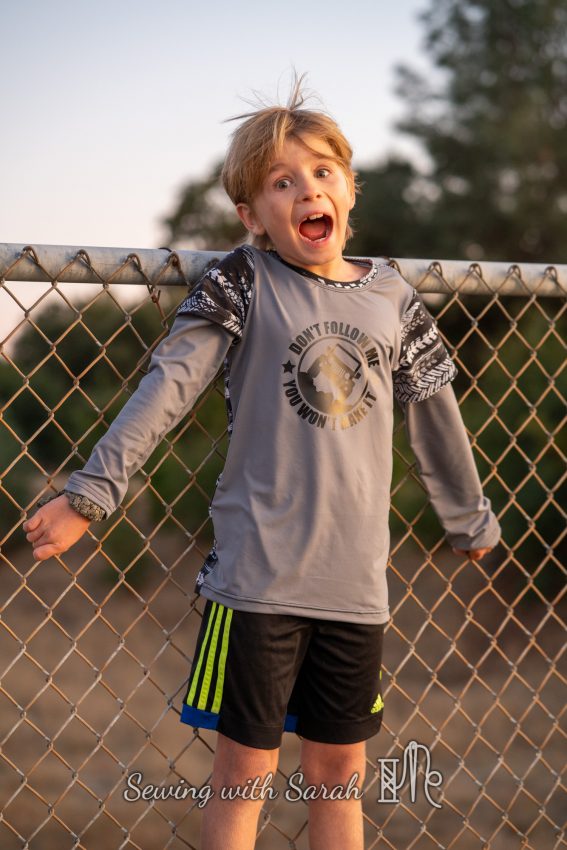 A Cool Tank for Mr. GQ

Noah’s tank is another repeat-offender pattern- the (free) Slope Tank from Greenstyle. 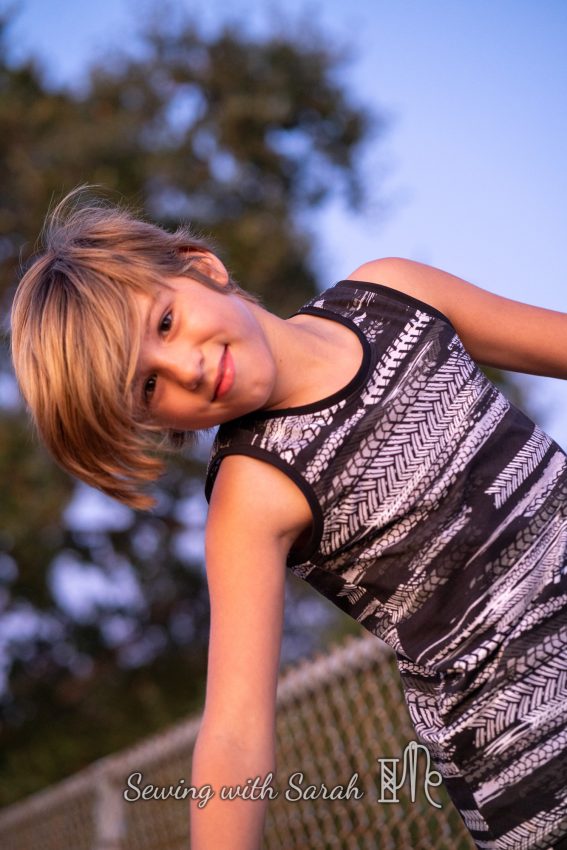 This pattern fits him perfectly, and will work for him throughout the winter, since he’s one of those kids who never gets cold. 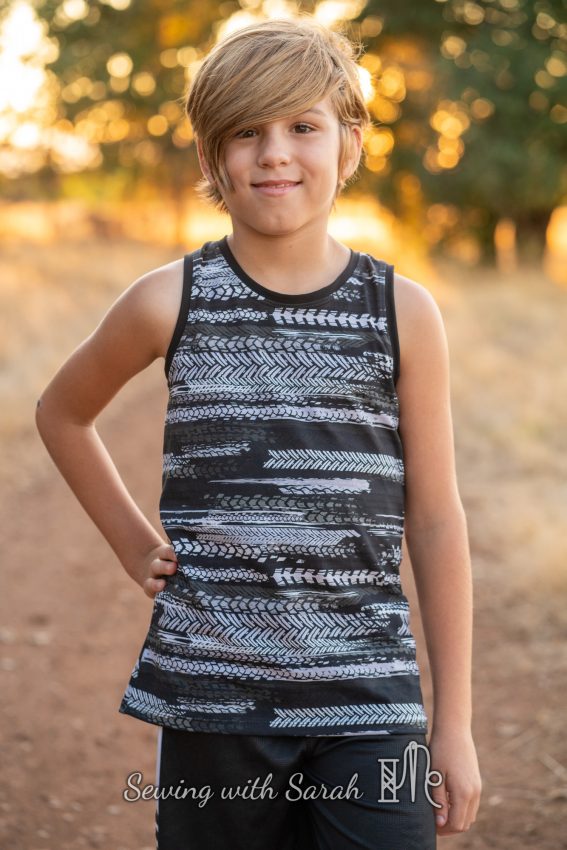 If the temperature really drops, he might throw on a hoodie, but he’ll happily strip down to a tank as soon as he’s indoors, so I know this will last him at least another year (or until he outgrows it, as 9 year old boys are wont to do!). In fact, he’s requested a dozen more, and keeps telling me how he prefers to have mama-made clothes in his drawer over store bought (yes, that type of flattery totally works on me), so I don’t imagine we’ve seen the last of this pattern on him.

Side note: Can you even stand that lock of hair that curls off to the side? We call it his “GQ” look, and he’s very particular about getting it to lay just right…

A New Dress and Leggings for Miss Not-Your-Birthday-Yet..

With all these September birthdays, my daughter, whose birthday isn’t until January (thank goodness!), was feeling pretty left out. 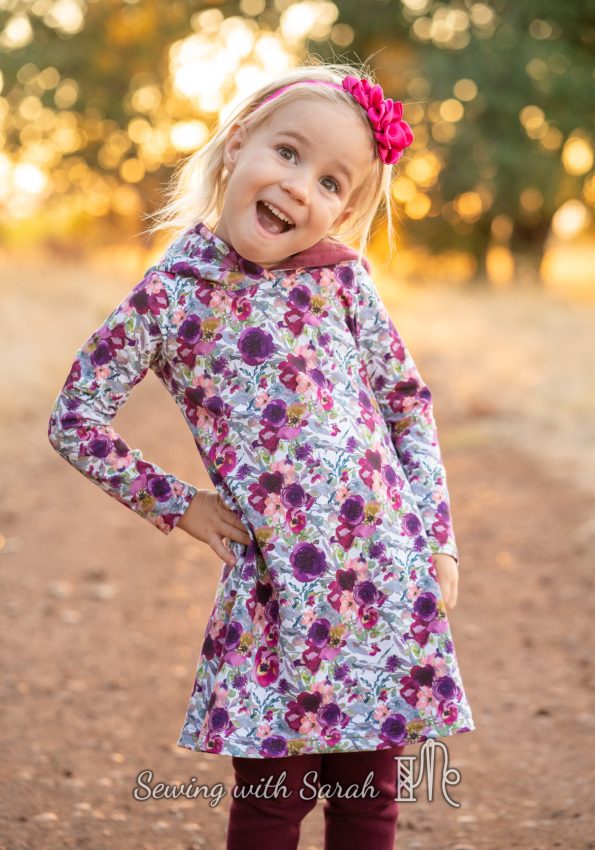 In her world, her twin brothers, mom, grandma, and two cousins (who are not twins) were all having their birthdays without her, and she was struggling to understand why she couldn’t also celebrate her birthday with everyone else. 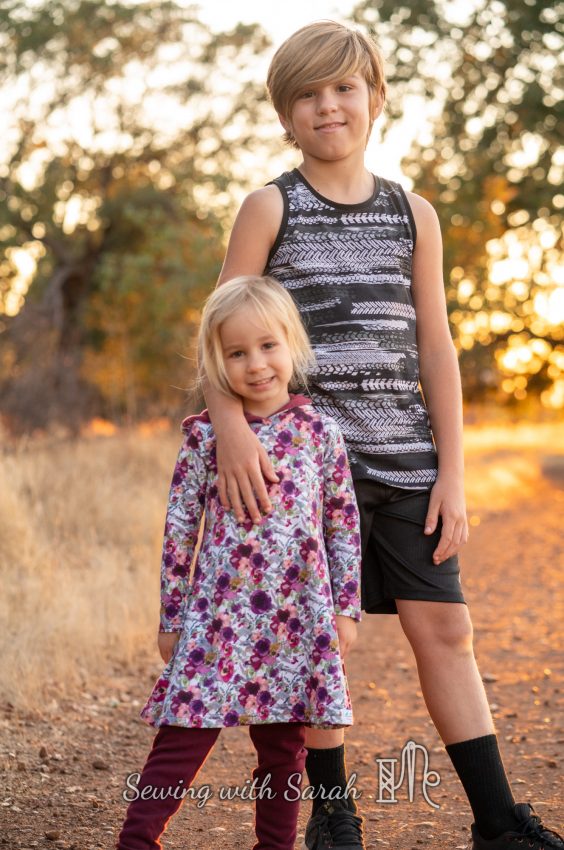 I’m not usually the type of parent to offer a consolation prize- in fact, I see it as part of my “job” to help my children experience and navigate a certain amount of adversity to prepare them for the real world- but in this case, I figured it couldn’t hurt to sew her a little handmade dress to help her feel included, since she was, in fact, in need of more fall clothes. This smile was my reward: 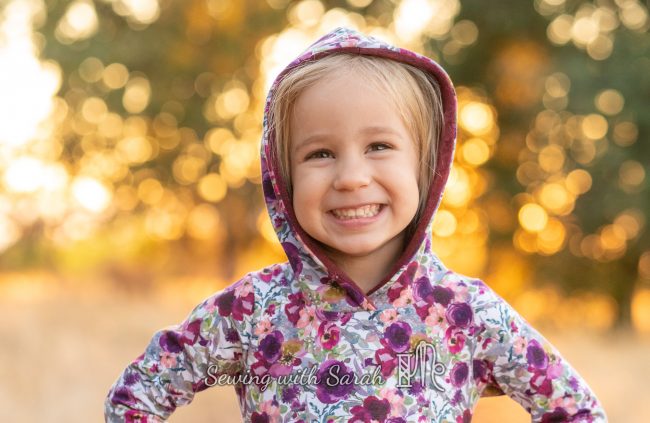 I used the Peekaboo Sophie Swing Dress and the Peekaboo Agility leggings for her outfit. Peekaboo patterns are another go-to company when it comes to sewing for my kids- the fit is always spot on with her RTW size, which saves me sneaking in and re-measuring her in her pajamas every time I decide to sew up a new size at 10PM (pleeeaaz tell me I’m not the only mom/sewist to have done that…). 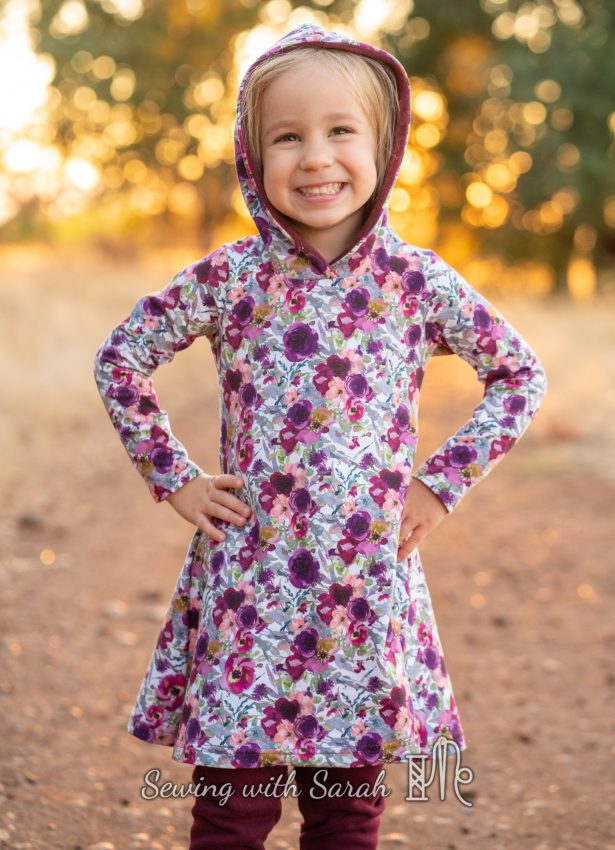 The floral fabric is also from Peekaboo, and the leggings and hood lining are made from So Sew English Super Plush. Super Plush is a special fabric exclusive to So Sew English, and while I accumulated a bunch of it last winter, this is the first opportunity I’ve had to sew it up. 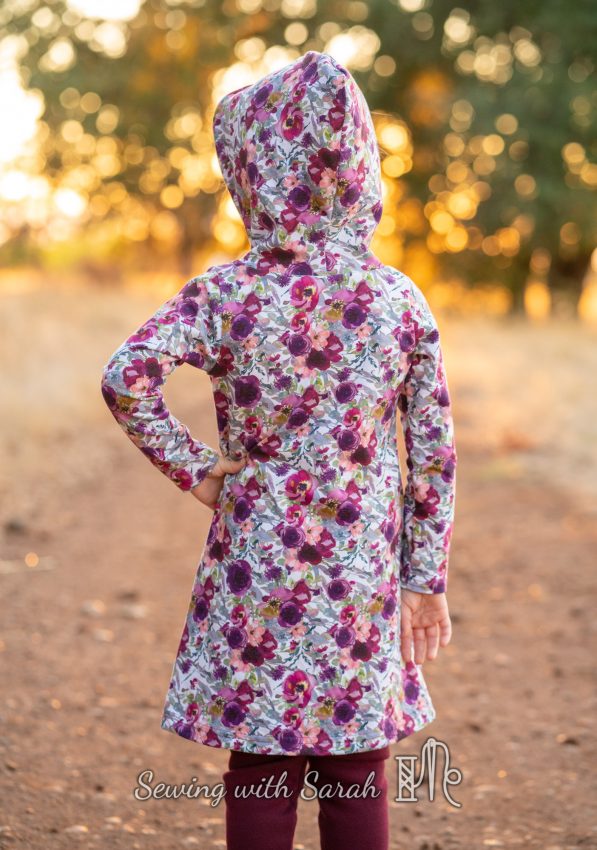 To accommodate the lesser vertical stretch of the fabric, I sized up on the leggings, and was glad I did. I wouldn’t recommend adult leggings in this fabric, but it would be perfect for joggers, hoodies, or other patterns that primarily need horizontal, rather than vertical stretch to fit. The leggings are a bit baggy on her, but she tends to prefer her clothes on the looser side, anyway. 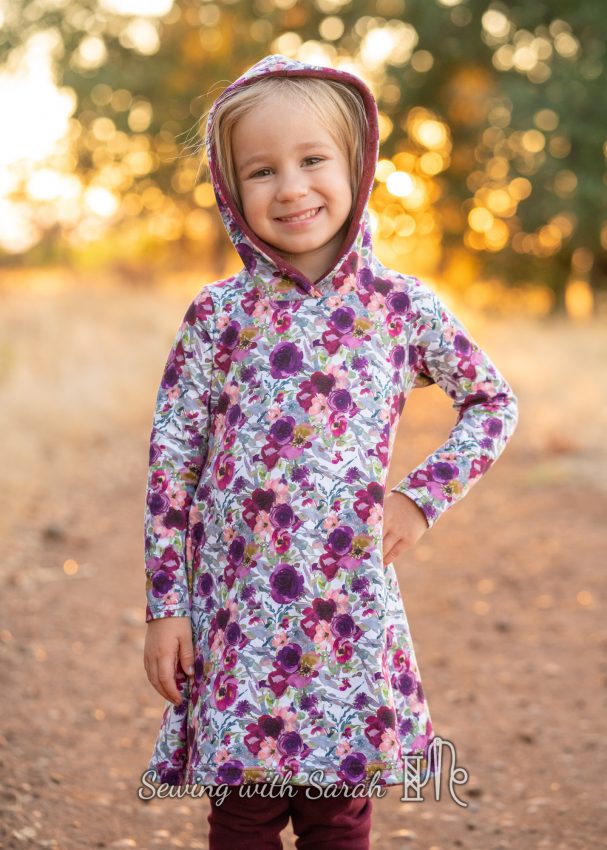 You can see how the “if my brothers can do it/get it/go for it so can I” philosophy played out when she insisted on climbing up the wall and hanging onto the fence for her own “hang-ten” photo (wearing ballet slippers, of course): 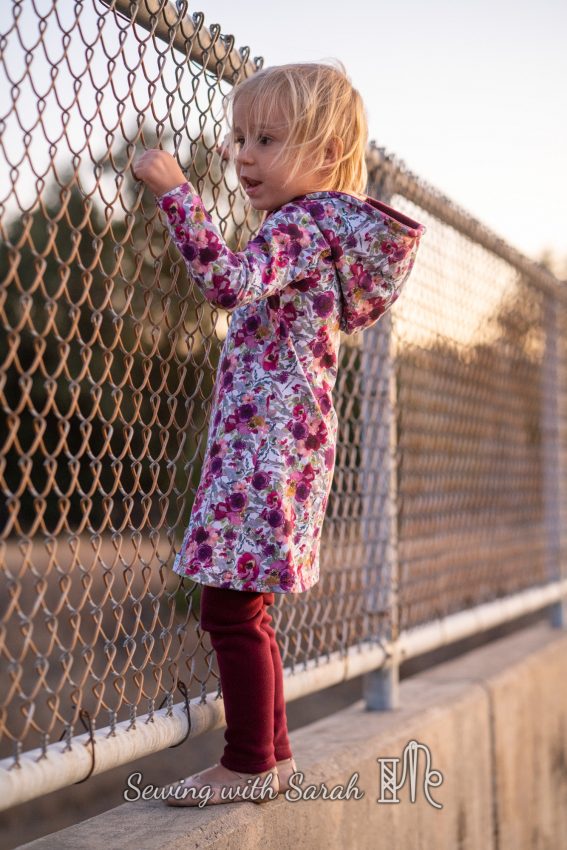 I was also concerned about the possibility of the fabric shedding as I sewed (plushy asthma attack anyone?) but the amount of fuzz floating around the room as I serged and cut was surprisingly minimal, and the result is the softest pair of pants she owns- resulting in an instant favorite.

I think I’m going to have to “gift” myself some of this fabric for a pullover this fall- I’ve been thinking of using the Jalie Alex pattern, which was part of their newest collection that released at the beginning of the summer (it was easy to overlook then, when all I could think of was tanks and swimsuits, but now that the crisper mornings have arrived, it’s risen tot he top of my “to sew” pile). Plus, I deserve something special for surviving all these birthdays, don’t you think?

Well, that’s another birthday post in the books! I’m curious about your birthday traditions- what do you like to do to make your kids’ special day more special?