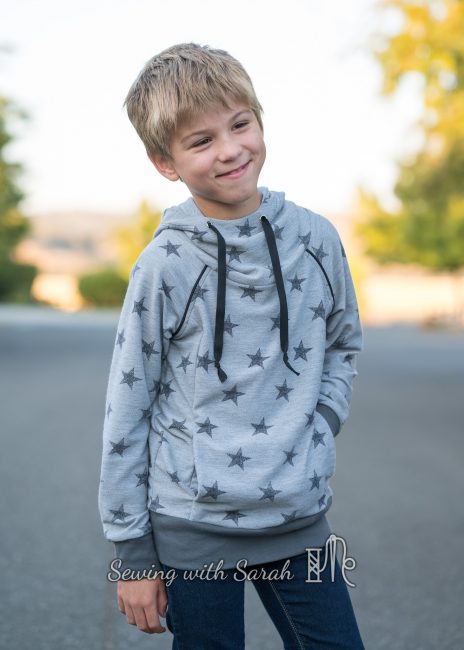 My boys have grown like crazy this summer, as boys in general tend to do when you’re not looking. All of a sudden, they’re big seven year olds, and that sweet baby look is being replaced by a more mature confidence as they step forward in their journey toward becoming men. Its amazing and heartbreaking all at the same time!

Touchy-feely mom moments aside, all that growth meant my big boy was in dire need of new fall and winter clothes, so when the test came out for the Summit Peak Hoodie from New Horizons, I jumped right in! I planned to make hoodies for both boys during testing, but ran out of time (and fabric!), so the second one will be coming along soon (as I’m sure Twin B won’t let me forget!) 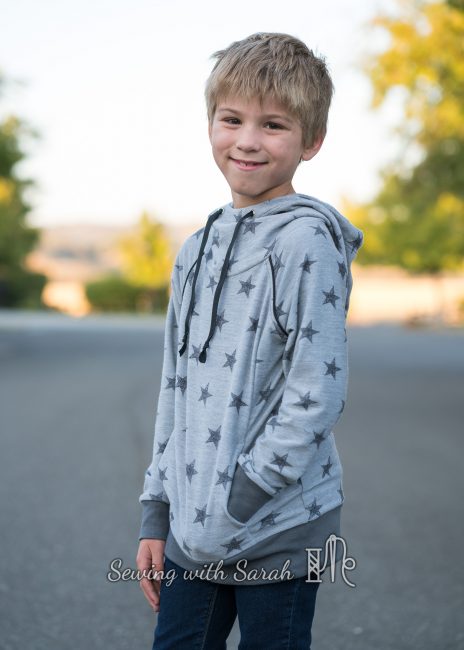 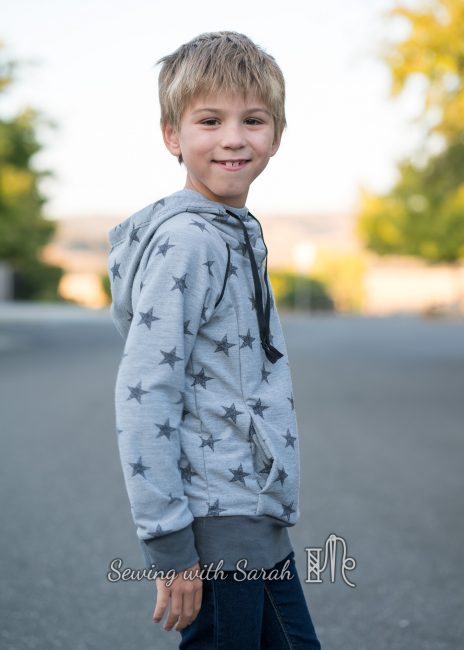 The Summit hoodie has options for a zip up sweatshirt or a pullover, with a large cowl type hood and nifty pockets that are built into the princess (seems a little strange to say this on a boys hoodie!) seams, and banded waist and sleeves. Its a loose fit and deigned to be unisex, so I may even be making Princess one at some point. The construction was pretty straightforward, except for the pockets, which require a little bit of mental energy. It’s hard to imagine how they are going to come together, but if you put your faith in Terra’s great instructions, they’ll come out just fine. 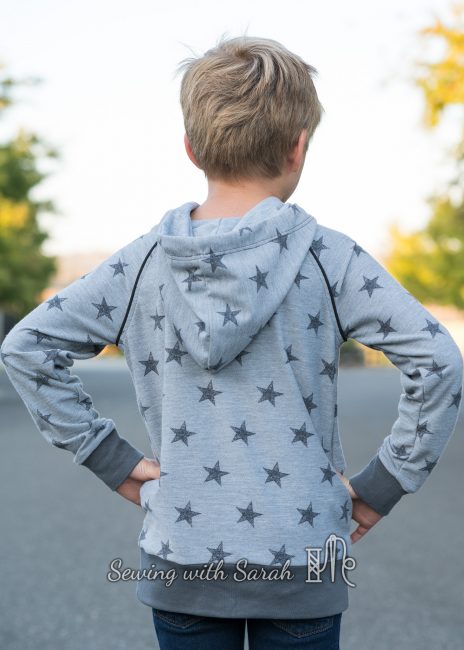 I chose the pullover because it doesn’t come up as high on his face as the zip up version does, and I was concerned about how he would feel about something covering his chin. I needn’t have worried- his favorite thing to do with the hood is to wear it like this and stumble around! 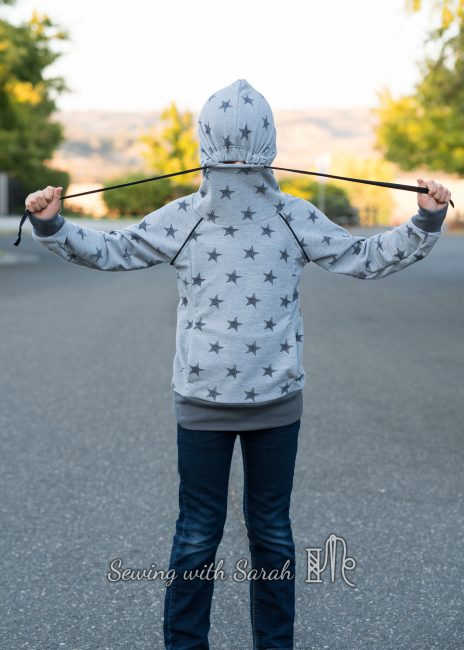 I used a star print reverse french terry from Sly Fox Fabrics for the main body and sleeves of the hoodie, and since it has a very nice smooth grey on the reverse, I used it for contrast inside the hood as well. 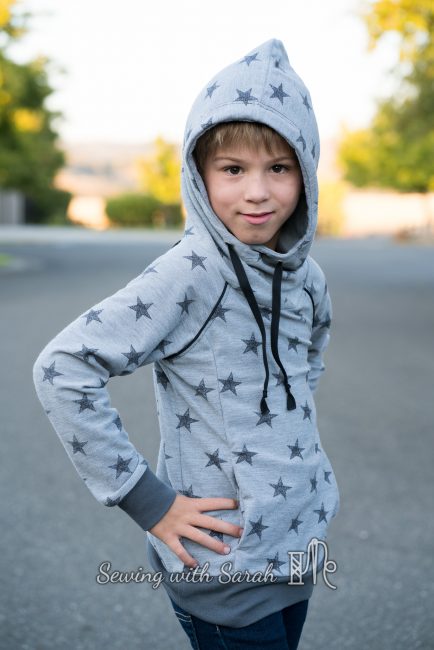 I added in some piping at the sleeves, and spent a fair amount of time making sure the armpits lined up perfectly. No one will ever see it, but it will make my laundry folding time just a little bit happier. 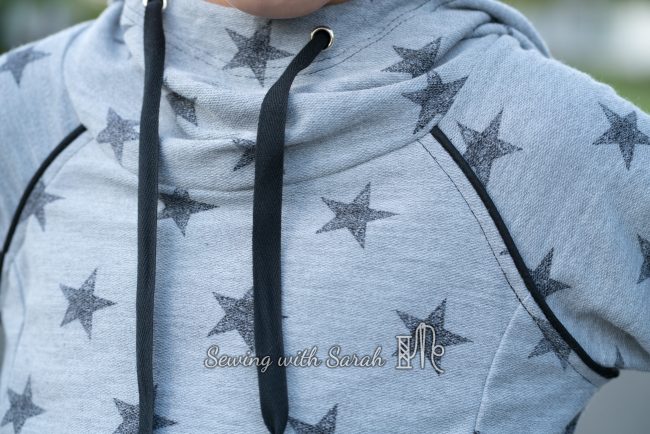 A contrast rib knit from Jumping June Textiles was used for the bands- I like using real rib knit for things like this because it really holds up better over time, but the super-stretch means it usually needs to be shorter than the pattern pieces indicate. My drawstring is made from 1/2″ twill tape– super fast and easy! 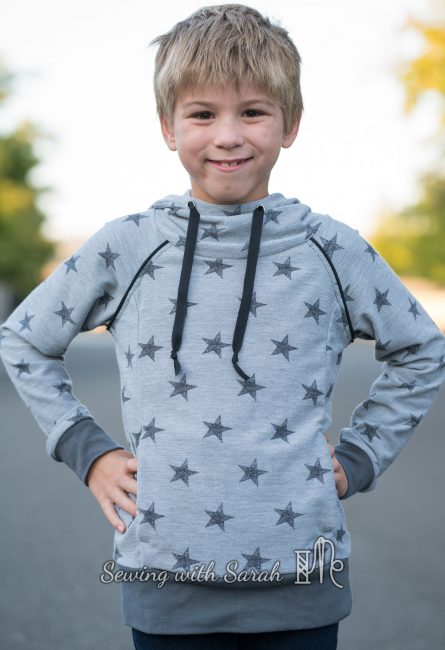 Since I haven’t done a “Tip Tuesday” in a while, I’ll share a little tip for topstitching the hood: the secret to getting the thread to match on the top and bottom of the hood is to use a thread that matches the top in the needle, and a thread that matches your lining in the bobbin. Seems pretty obvious, but it took me years to figure that out! 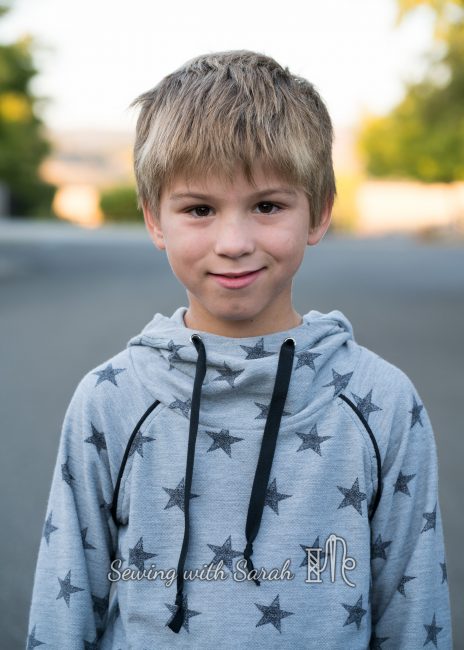 (Do you see that look? He’s a better model than I’ll ever be! He rocked this photoshoot and insisted on all his own poses!)

The only bummer about the whole experience was the fact that a size 8 hoodie takes nearly 2 yards of fabric (if you use the fabric for the hood lining too)- meaning I don’t have enough leftover for a pair of French Terry Brassie Joggers as I was hoping- time to order more I guess- it also comes in a blue colorway, so maybe I’ll order that for my other son, and be more realistic about how much fabric (and food! you wouldn’t believe how much FOOD) growing boys need!

Grab your pattern HERE, and don’t forget to follow me on Facebook so you don’t miss a thing!