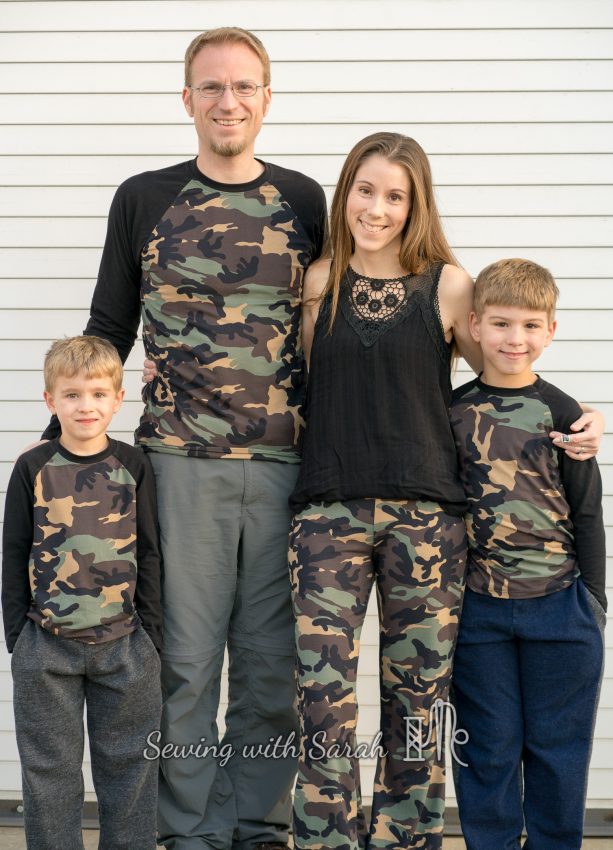 One of my sewing goals for 2018 was to make more things for my husband and sons, and to delve more into their fitting needs, as well as my own (see the whole post here).

I’ve had 30 years (plus or minus a few…won’t say which!) to evaluate my body shape and its fitting idiosyncrasies- but I’ve only just begun to scratch the surface when it comes to understanding how men’s bodies are uniquely shaped and proportioned.

Obviously, they have a few less curves. But as I’ve sewn more boys and mens patterns over the last year, it’s become apparent that there is much more to fitting my favorite guys than just taking in and letting out a few seams, and I want to not only make them more clothes, but make them more clothes that fit.

I’ve noticed that my husband, in particular, has broader shoulders than many patterns draft for. At least, I think this is the issue, and it causes his neckbands to stick up at an angle across his shoulders, and results in drag lines from his shoulders to the front of his chest. T-shirt patterns with set in sleeves seem to fit him better than raglans, where it really becomes obvious.

Similar problems tend to pop up with my sons as well, especially Noah, who is built like a linebacker despite having rather petite/normal parents. (Seriously. He just came out of the womb that way, even as a 4 lb preemie. He also eats every .038 seconds). Oliver tends to be more petite, but most of his height is in his torso, and his waist/chest and height fall into drastically different categories- so I need to make custom adjustments for him as well. 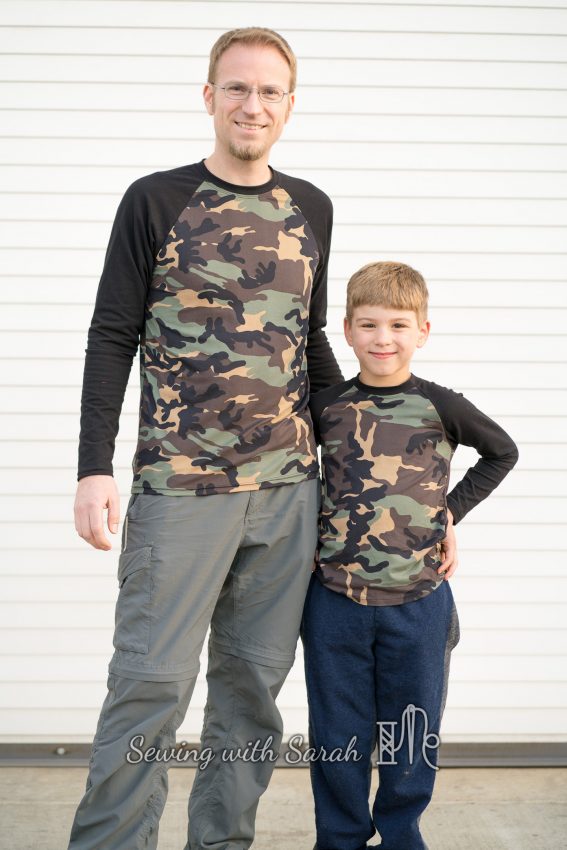 I’ve tried several raglan patterns for all three of them, with some measure of success, but hadn’t quite found one that fit them perfectly yet, so I was still on the hunt. One that keeps popping up for me is the Jalie Nico Raglan, so I decided to give it a try, using some camo double brushed poly and black cotton-lcyra from Sly Fox Fabrics, because nothing draws my guys in like the velvety goodness of brushed poly (Spoiler alert: I wasn’t able to resist either!)

It took me longer than I’d like to trace off three separate sizes, but I did love the fact that I could use the same pattern for all of them- hooray for Jalie’s expansive size range! I went with a 6 for Oliver, an 8 for Noah, and a U for Stephen. Oliver’s measurements were a bit below the size 6, but since he doesn’t like his clothes tight, I figured it would accommodate his height well, and could always be taken in later if needed.

Side note: my pattern has measurements that are different from the usual women’s sizing chart, but says “womens and girls” at the top- which I think is a typo. I don’t think this pattern is meant to be unisex- I can’t imagine that working in anything semi-fitted like this. The more I sew for men and boys, the more leery I am of “unisex” patterns- they are usually drafted with one gender in mind, but are marketed as unisex because they aren’t very fitted. Still, I find it makes a difference, especially after age four or so.

Having sewn about a million raglans recently (see my raglan comparison post here), I could do these in my sleep, and all three came together in a single evening. It was a welcome mental break after a weekend of sewing jeans (more on that SOON!), and I was anxious to see how they would fit! 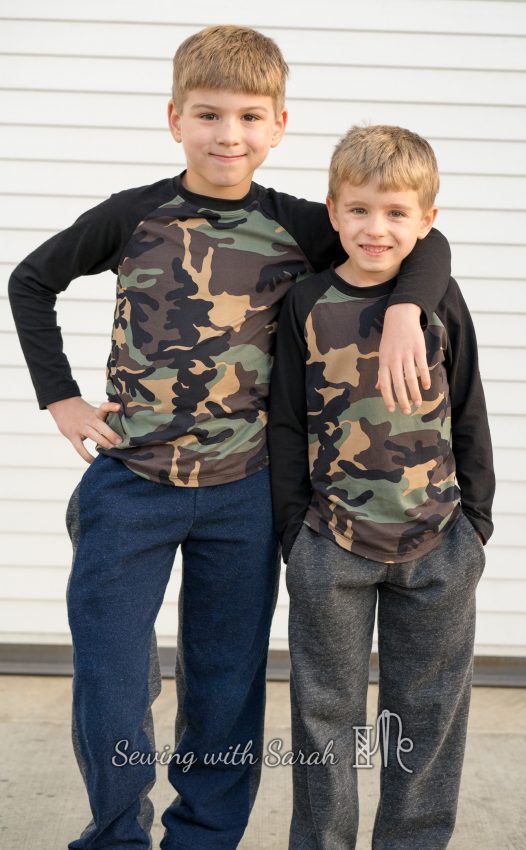 This is the best fitting raglan pattern I’ve tried so far- for all 3 of my guys! I immediately noticed that while there are still a few pull lines at the back and shoulders of my husband’s top, it was much, much better than the other raglans I’ve made him, and also more fitted, which he likes, and I think is pretty sexy.

The boys’ shirts fit pretty well too- Noah seems like he could go up a size soon, and Oliver’s size 6 fits perfectly, despite being more of a size 4 in the chest, so I’d say if anything, this pattern might run a tad small. Its definitely meant as a t-shirt type fit, rather than a sweatshirt. 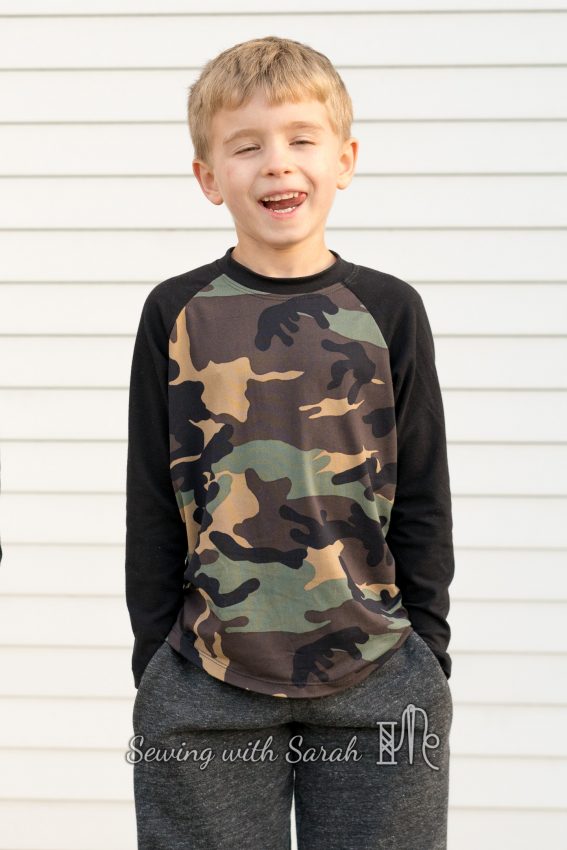 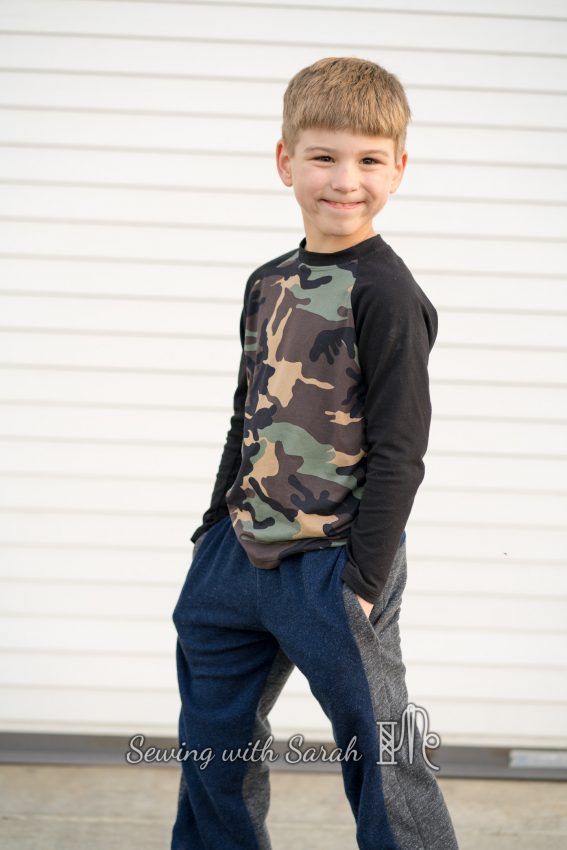 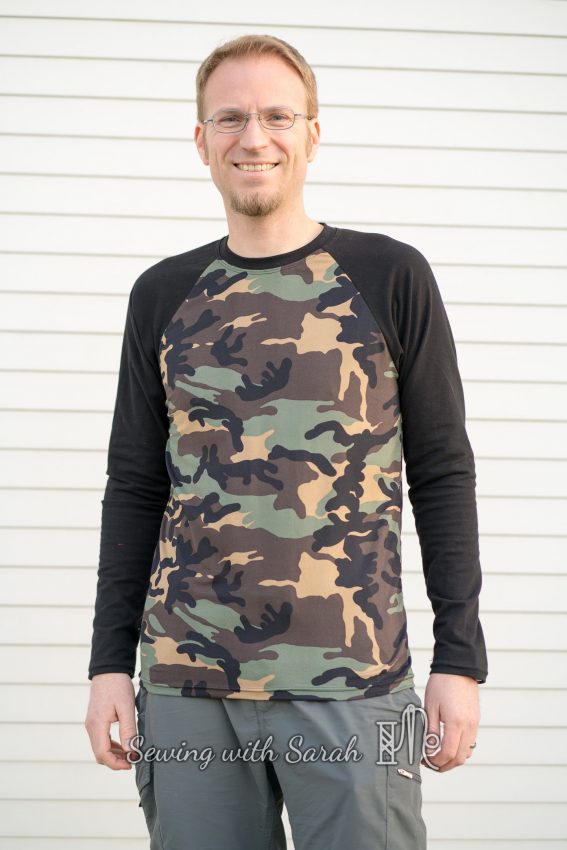 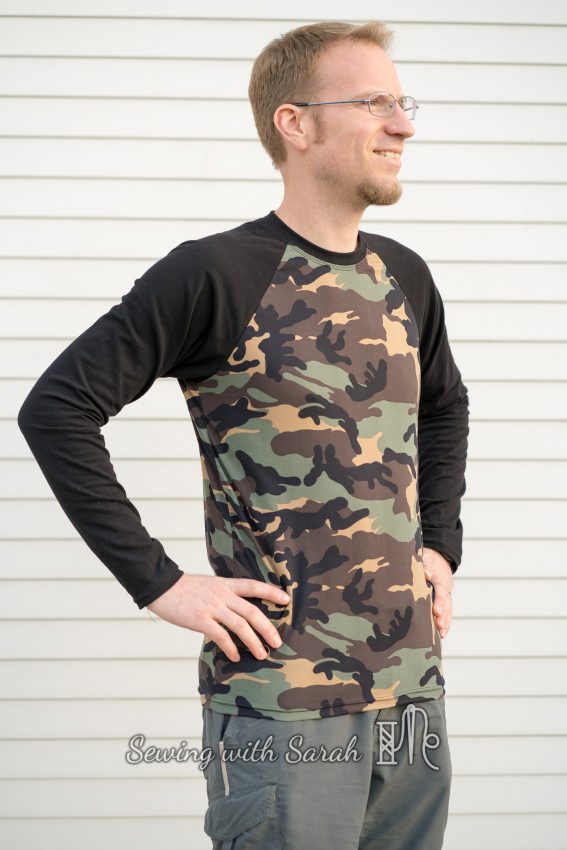 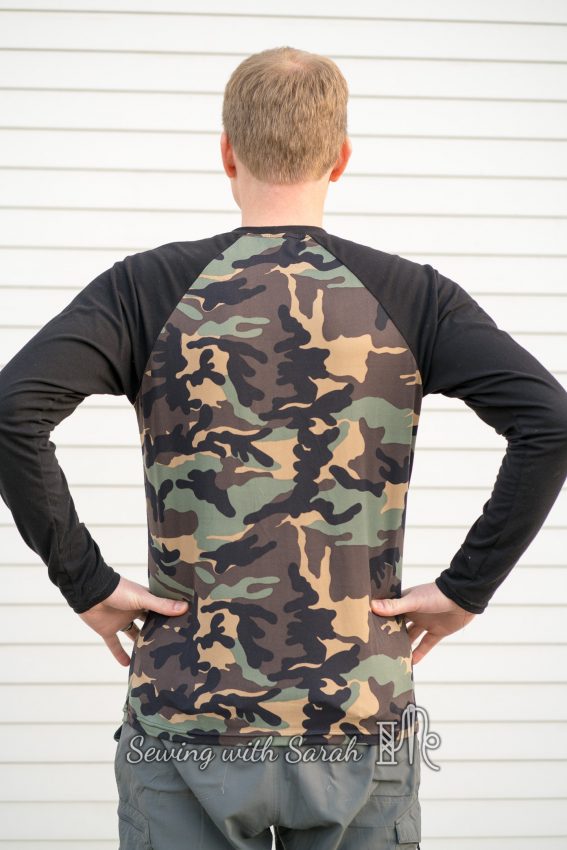 Still, I’m really pleased, because the fit is good enough to use as my base for altering- I think next time I’ll try a broad shoulder alteration for Stephen, and size up one size for Noah. Oliver says he wants his neck a bit lower, so I’ll make that modification for him as well.

After all that self-less sewing I needed something for me- so I used my leftover fabric to make a pair of matching Portlander pants for me! 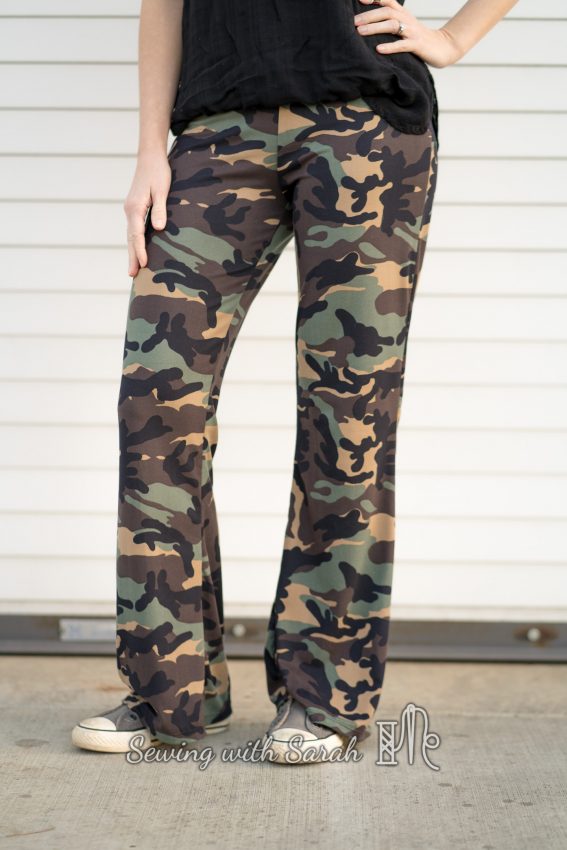 I’ve made several of these now- with no plans for stopping! They are uber-comfortable, and I haven’t even managed to put a drawstring in, because they came off the machine and went straight onto my body! Oh well, it always sneaks out in the wash anyway. 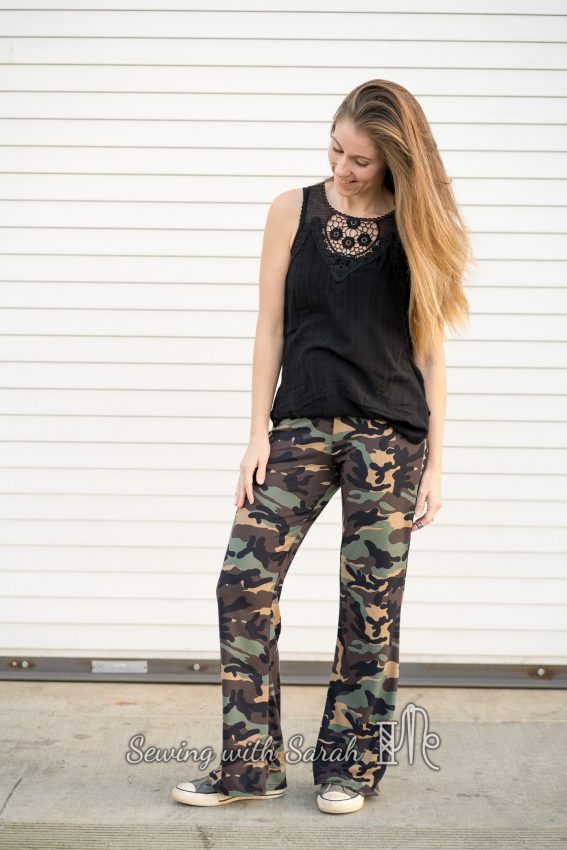 I just love how this boy still wants to cuddle with his mama! 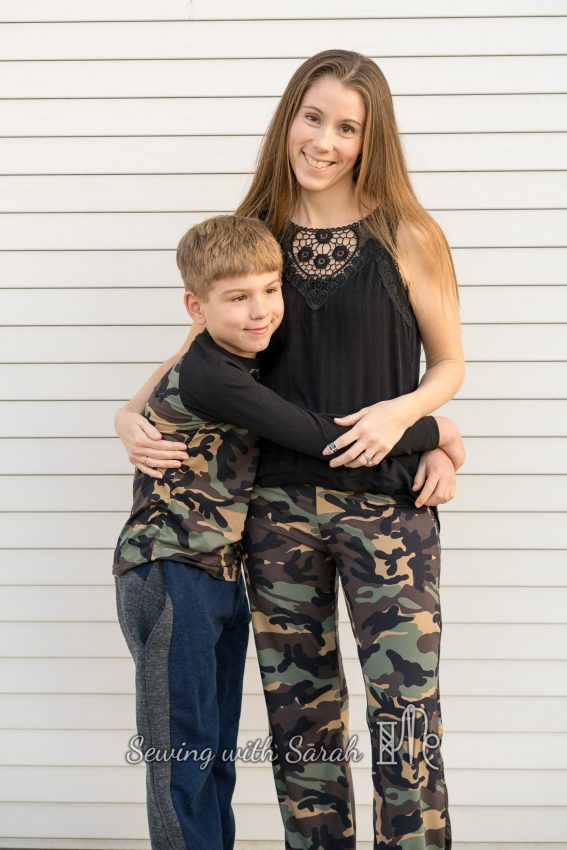 Getting siblings to take pictures together is always a challenge- Noah calls this his “squirrel face”: 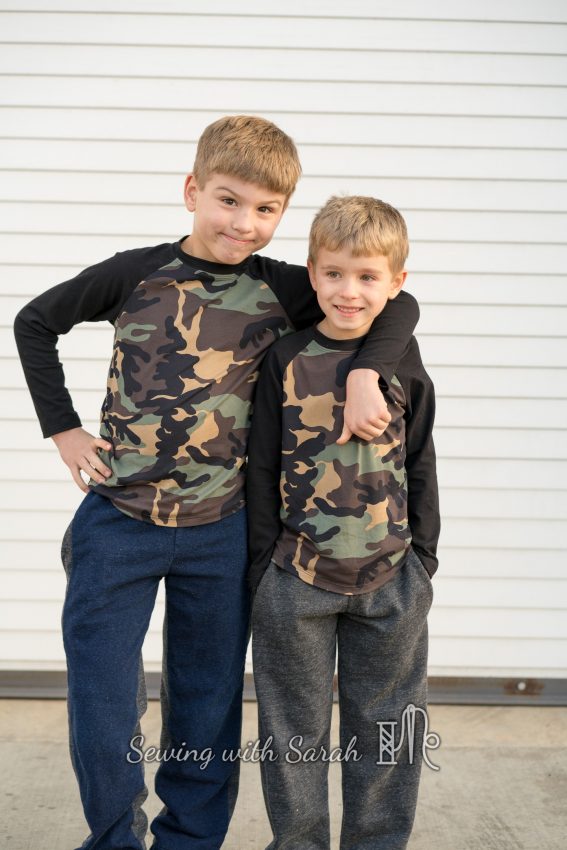 You’ll notice someone (the baby!) is missing from these photos- as much as I’d love to include her in our pics, she gets mistaken for a boy often enough in pink (#barelytherehairbabyproblems) that I don’t want to make her anything that might exacerbate the issue- after 2 boys I want to celebrate all things girly! At least until she’s old enough to express her opinion on clothes, and demands an all-camo wardrobe as revenge for all the pink I put her in!

I’m looking forward to making many more of these raglans, and to continuing to sew more for my favorite fellows! What’s your favorite pattern to make for the guys in YOUR life?

This post contains affiliate links. Thank you for your support!