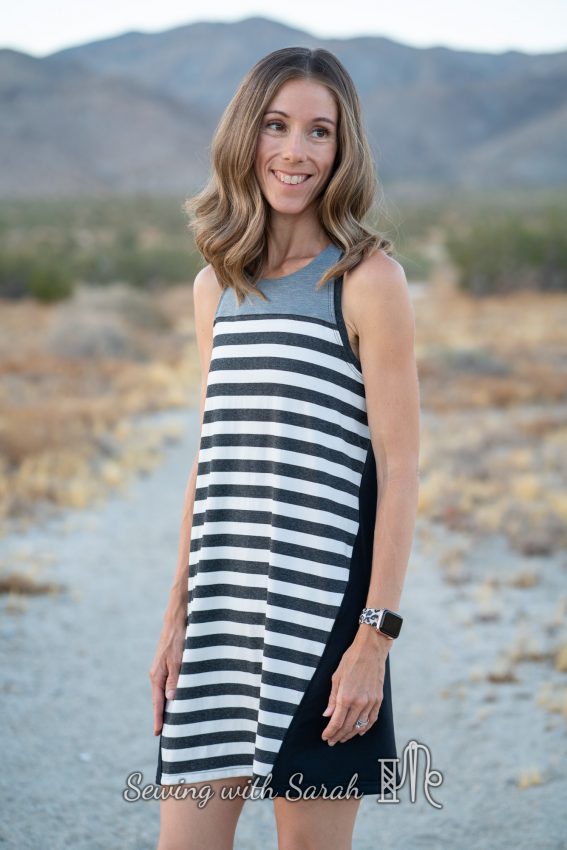 Note: This post is part of a sewing and travel documentary, as I share what I sew and experience during our two month RV tour of the American Southwest. You can read part one of that series HERE.

After San Diego, we were originally scheduled to journey to Lake Havasu in Arizona, but I quickly got nervous about hte weather there- namely the extreme heat. While it was a balmy 70-75 degrees in San Diego, it was quickly topping 110 degrees in Lake Havasu, and not even a spacious body of water can make that pleasant for RV living. However, we still needed a halfway point between our third stop, the Grand Canyon, and Coronado, so I looked at the map and randomly picked out Palm Springs as a good option.

When I look for a place to stay I’m looking for three things:

Palm Springs, though I’d never been, seemed to have all three of these requirements met, so we quickly booked reservations at the local KOA. I’m a pretty big fan of KOAs for travel- they’re consistently pretty good quality, often have fun kid friendly amenities and are reasonably priced (usually- Santa Cruz KOA, I”m looking at you!). 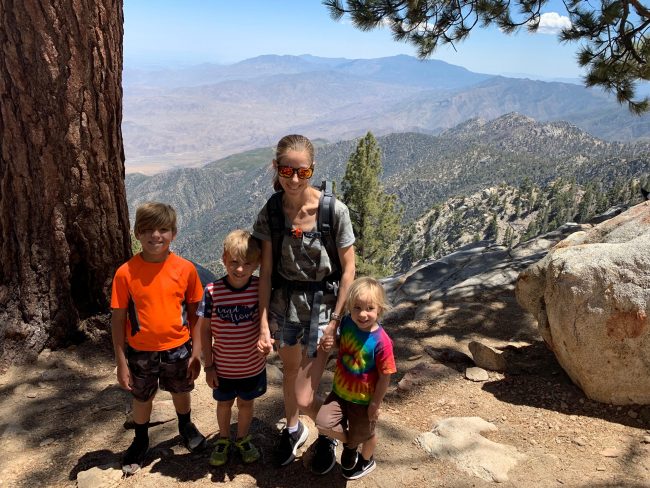 When we arrived, we found the place almost deserted. Clearly, summer isn’t a high time of tourism in the Palm Springs area, and there were only a few other rigs parked at the campground. This ended up working in our favor, because not only did we have the lovely pool, hot springs fed hot tubs, mini golf course, and playground to ourselves during our stay, but the very sweet managers even let me set up all three of my sewing machines in their rec room, since it wasn’t being used for anything else.

Don’t judge the no-makeup, post swim hair, camping photo, m’kay? Not alot of time goes into beauty on the road, and I’m totally OK with that! 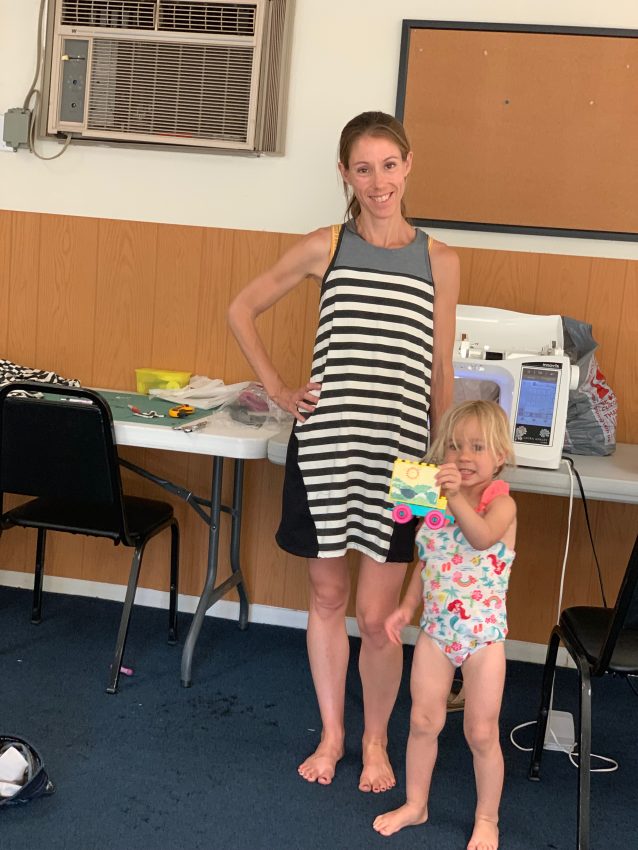 Despite being cooler than Lake Havasu, Palm springs was still toasty hot, and our RV air conditioners struggled to keep up during the middle of the day. We ended up creating a schedule that was similar to a lot of other desert animals- get up early, play (or in my case, run), hide out during the day somewhere cool, and come out at night to frolic. 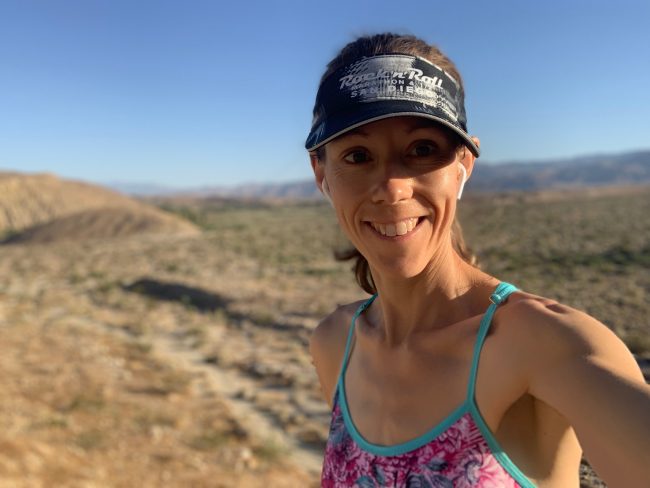 Several favorite activities (when I wasn’t sewing or swimming) included taking the Tram up San Jacinto mountain, visiting the Windmills (and having a tasty date shake!), checking out the Air Museum, and doing a little fun shopping at the Outlet Mall (no  more RTW fast for me!) 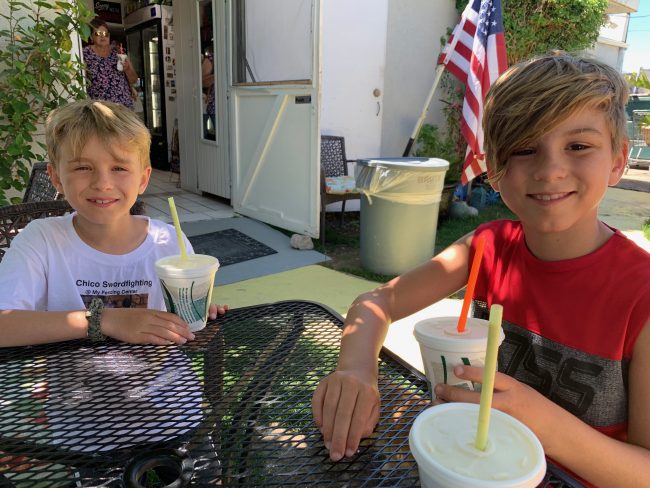 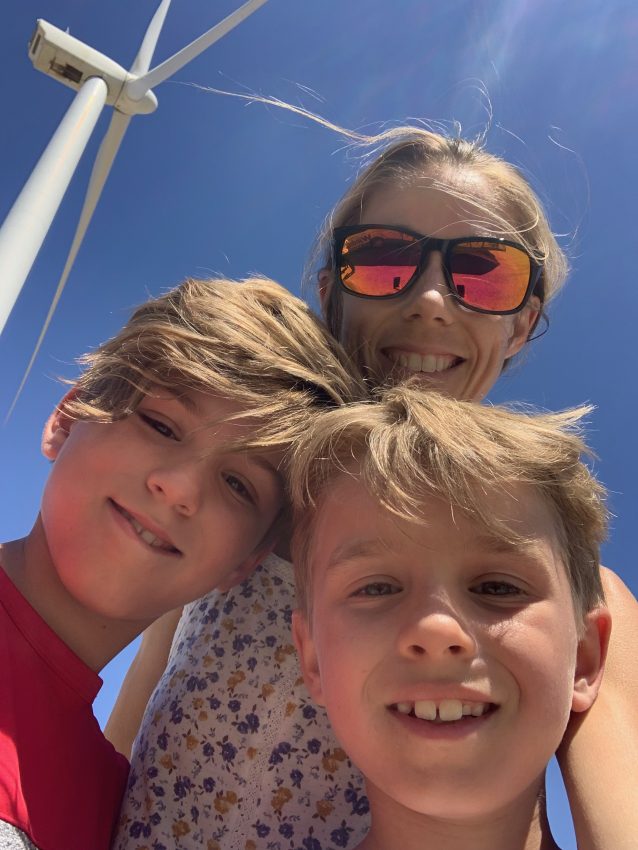 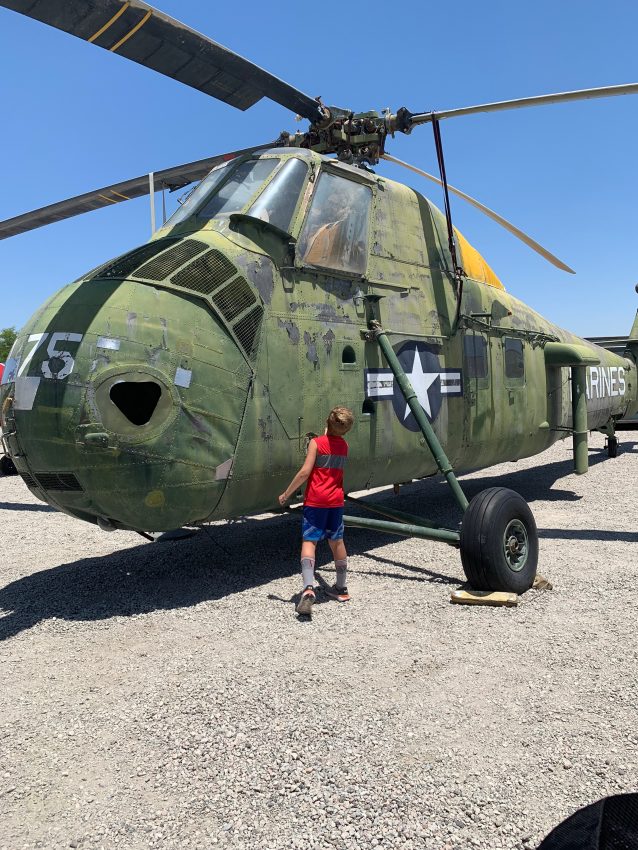 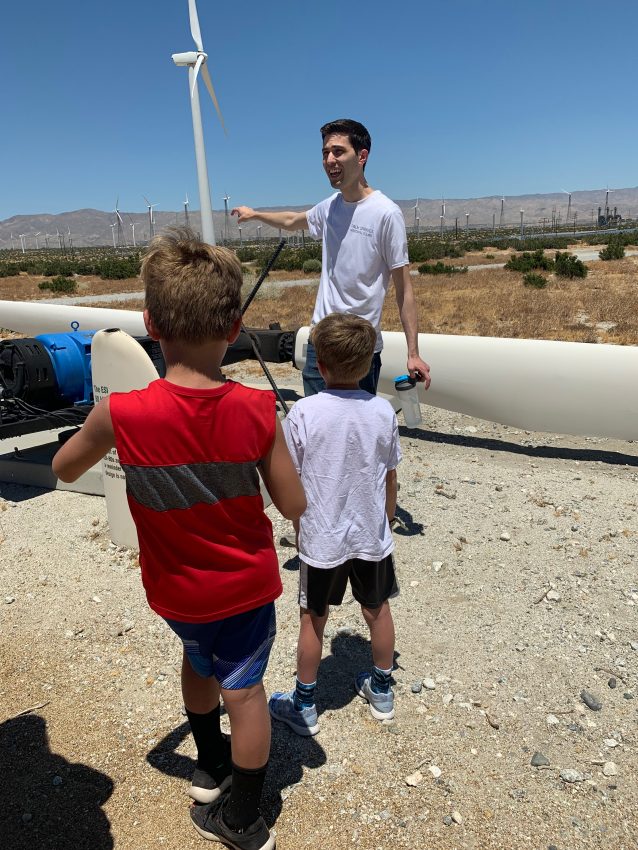 My two sewing related accomplishments were a dress version of the Jalie Nikita, and a pair of succulent print athletic tights. 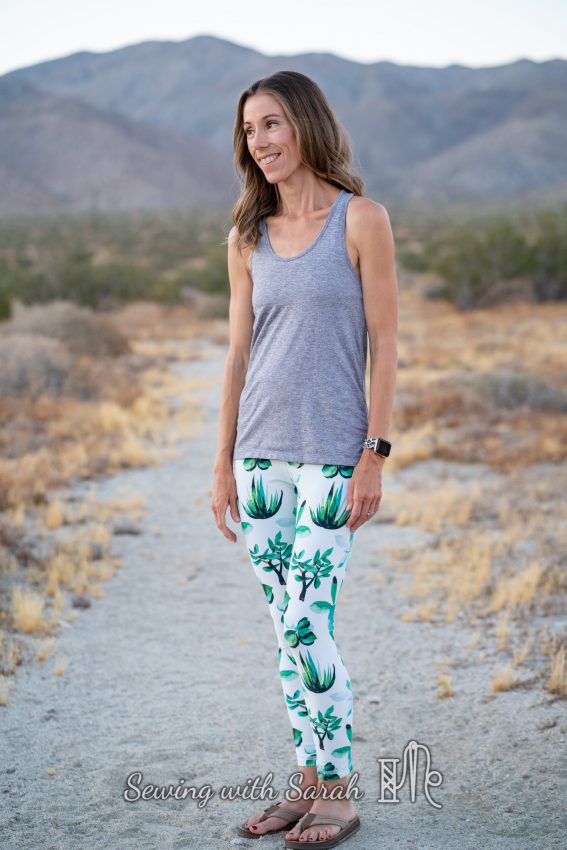 The Nikita dress was one of the first patterns I put on my list from the new Jalie collection. I originally planned to make just the tank view, since I don’t typically wear loose fitting dresses, but the heat got the better of me, and I decided to give it a try. The heat must have also partially zapped my creativity, because I basically copied the pattern envelope in its entirety- the first time I’ve done such a thing, but probably not the last. What can I say, the stripe/monochrome combo is really cute! 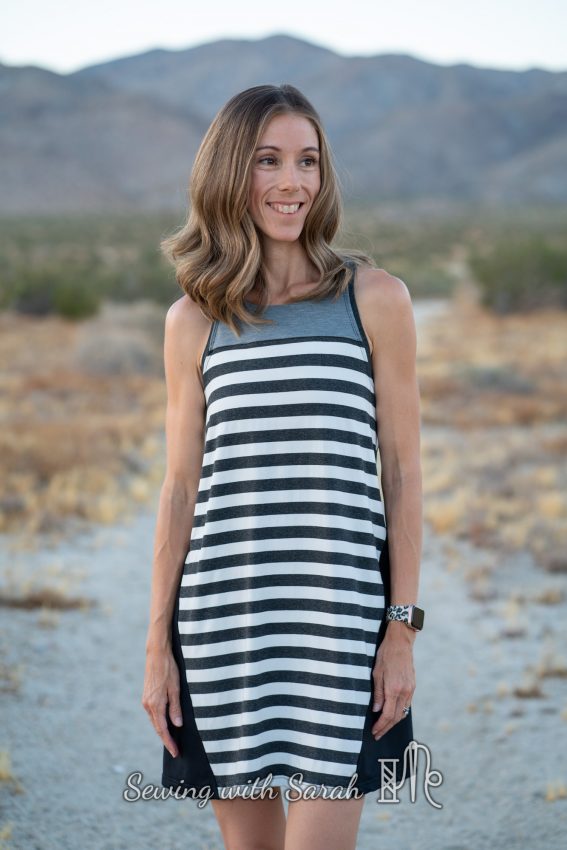 Three athletic french terries went into the production of this garment- the stripes are a nice heavy weight rayon lycra Fabric Fairy, the solid black is a delicious premium athletic french terry from So Sew English, and the grey is a piece I picked up from Mill End Fabrics in Portland during our trip last fall to escape the fires. 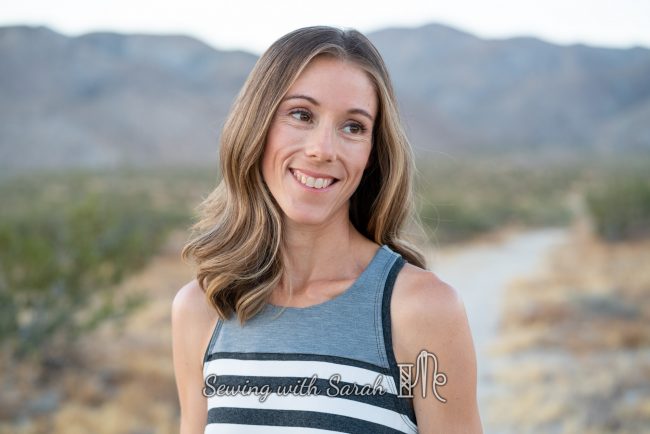 I really love how these came together, and despite my initial hesitation, the angled style lines of the dress keep it flattering, despite the lack of waist/hip shaping. The only thing it’s missing is pockets- I think I’ll include those next time, so I have somewhere to store my sunscreen and lip balm (the air was SO dry!). The way the back yoke is constructed was a little confusing at first- and I’d highly recommend basting this area and turning it out to make sure you have it right before locking your stitches. 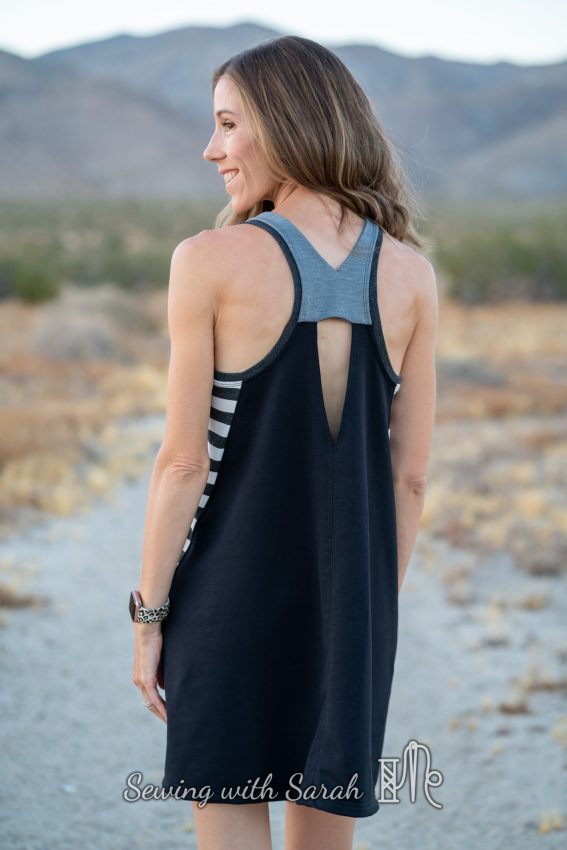 I do love the back V detail, and the use of the burrito method means there’s a really clean finish, inside and out. 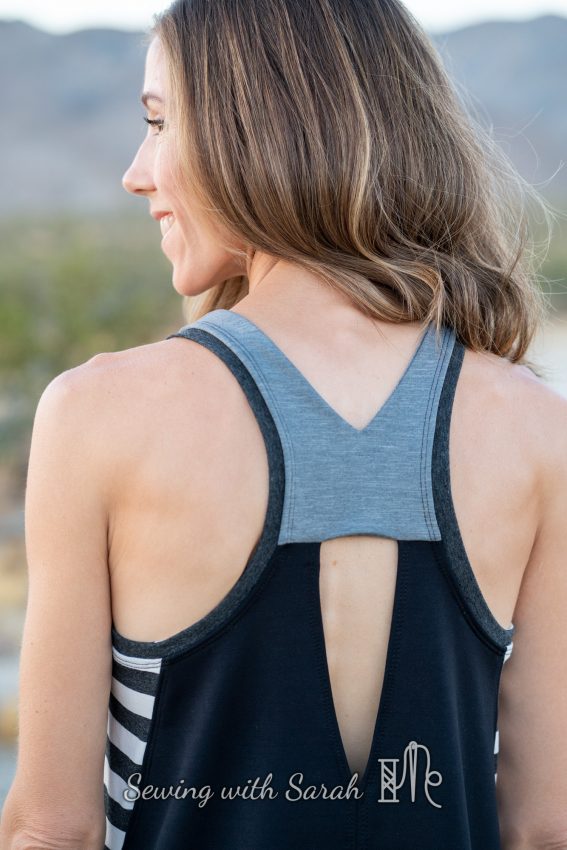 My second make, of course, was the succulent print Inspire tights (worn here with one of my workhorse Lille tanks), 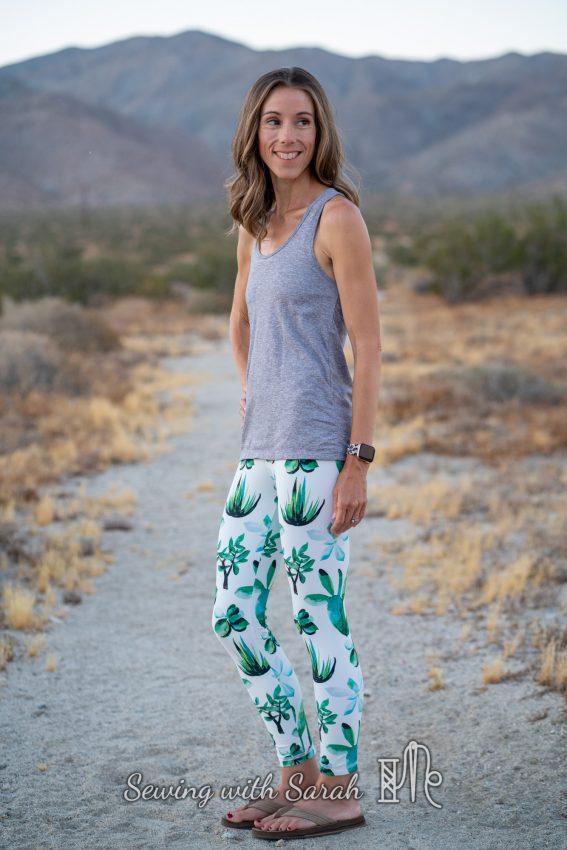 Since I was going to be spending the better part of the summer in the desert, I figured a pair of cacti print tights was going to be pretty much a uniform for me. The fabric is a custom print from Bow Button Fabrics– and the same base as the “yoga” from Styled Magnolia and the Zenith Quasar Yoga Swim Spandex. 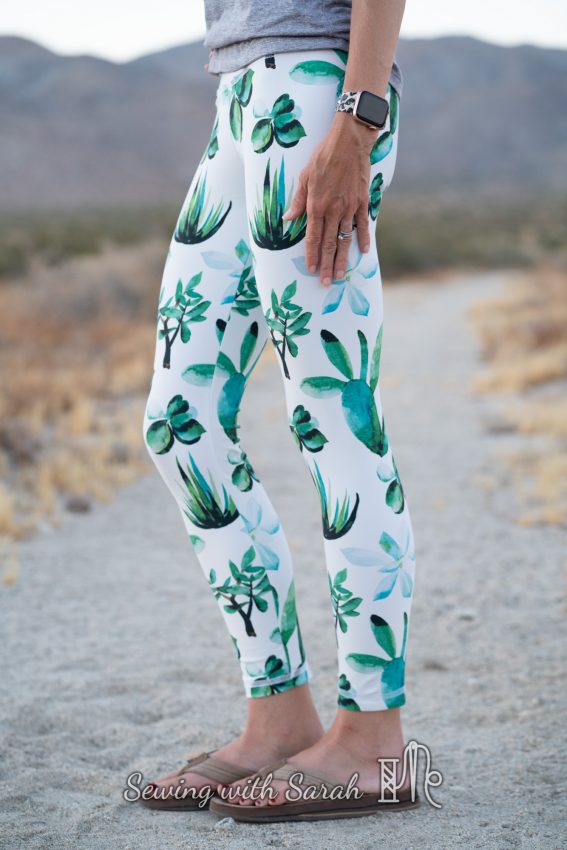 I love it for its superior moisture management and its smooth face- not at all slippery like swim, and an excellent fabric for a beginner athletic wear sewist.

I added the back zipper pocket to my TNT Inspire Tights pattern (check out the hack tutorial here), to hold my phone as I run, and cut the cropped length, for a compromise between sun coverage and ventilation. 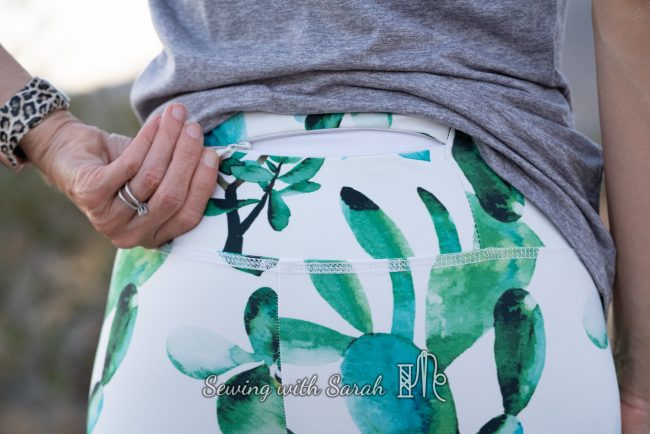 I’ve already made a billion of this pattern, so there’s not much more to say, except that it’s on sale right now (with the rest of the Greenstyle lineup) for the holiday, and you can get 30% off with the code “FREEDOM2019” through 7/5/19.

Well, that’s it- my next post will take us to the Grand Canyon, where I’ll have more crazy adventures and sewing to share!