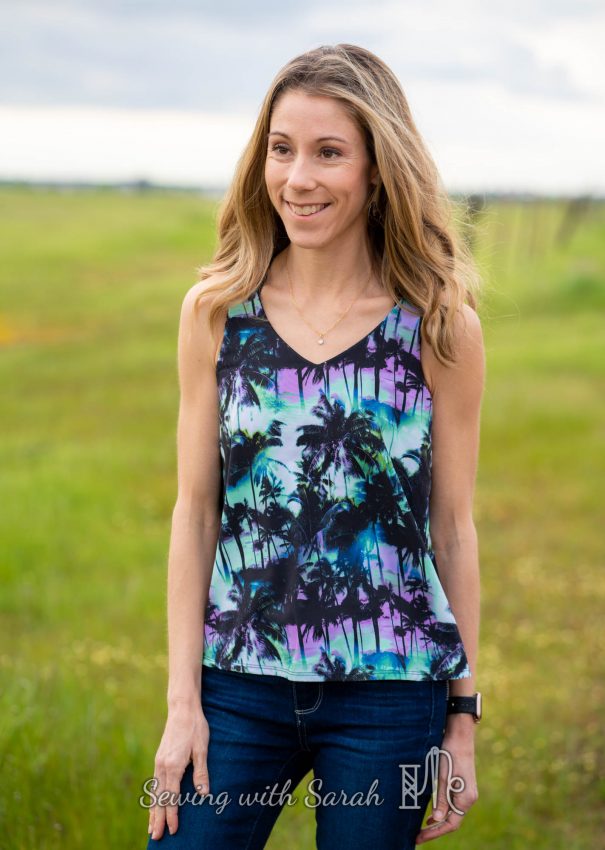 This has been a rough season for all of us, but one of the best things on the horizon is the season itself- Spring brings with it the promise of new beginnings, warmer weather, and, hopefully time to find some joy in the little things.

I know that’s easier said than done, sometimes, and truth be told, I found myself going into the Easter holiday feeling pretty blue- but I steadfastly followed the “fake it till you make it” life strategy, and ended up enjoying a very different, but very pleasant holiday.

Usually, grandma is in charge of egg dying, but I bravely took it on, wearing my least favorite clothes and setting out the supplies in the front yard. We had a couple worm causalities (turns out that they really don’t like the vinegar/water/dye solution when it’s poured out, and several came up gasping for air as the kids poured out their cups after dying the eggs), but other than that it was surprisingly painless.

I also prepped some Gluten Free Cinnanon rolls, using a new recipe this time- last year’s rolls were barely edible, and I was deteremined to try again. We didn’t have any powedered sugar for the icing (and didn’t feel that this shortage justified a grocery trip under the circumstances), so they stayed “naked”, but they were enjoyed the next day anyway, after a delightful morning of egg hunting. 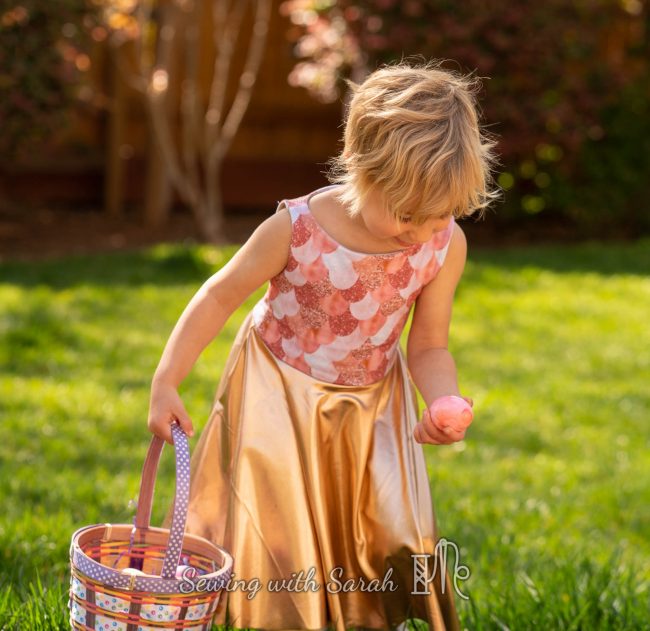 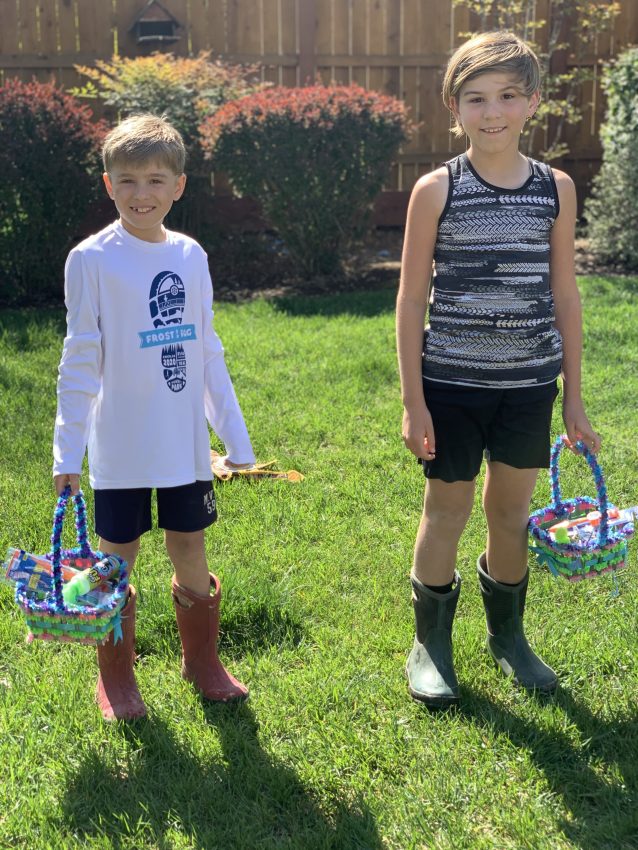 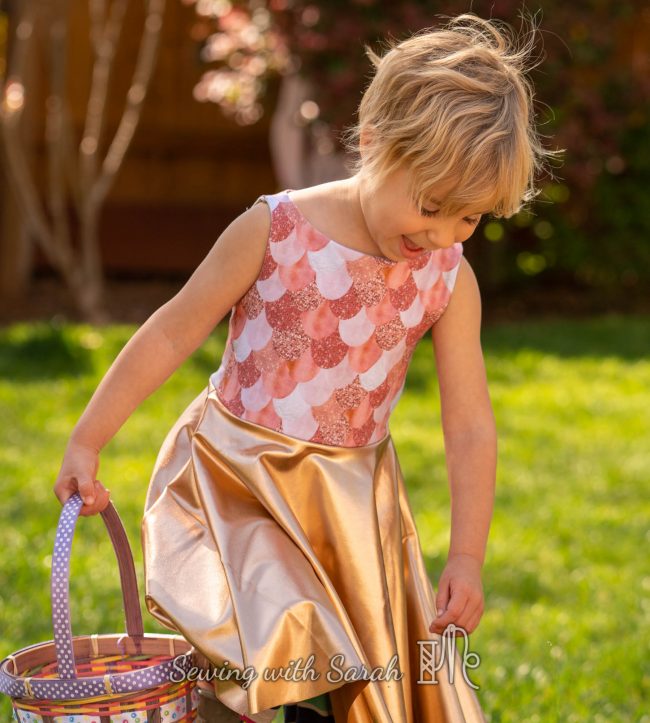 I’ll admit that there’s still one egg out there that’s MIA, but we’re moving soon, so I guess we won’t have to stick around to smell the consequences of that little bit of forgetfulness (another reason why it’s better in Grandma’s yard). 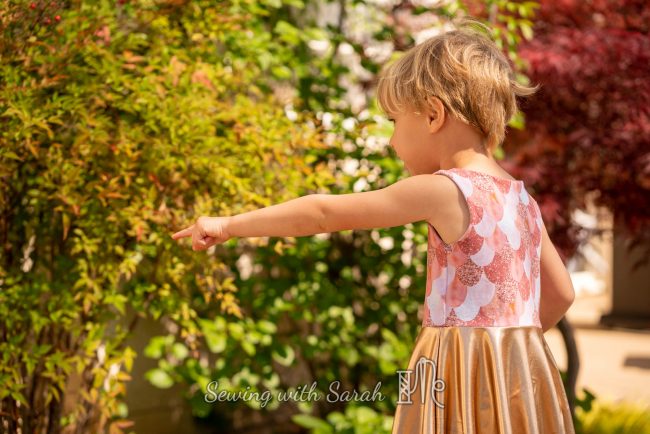 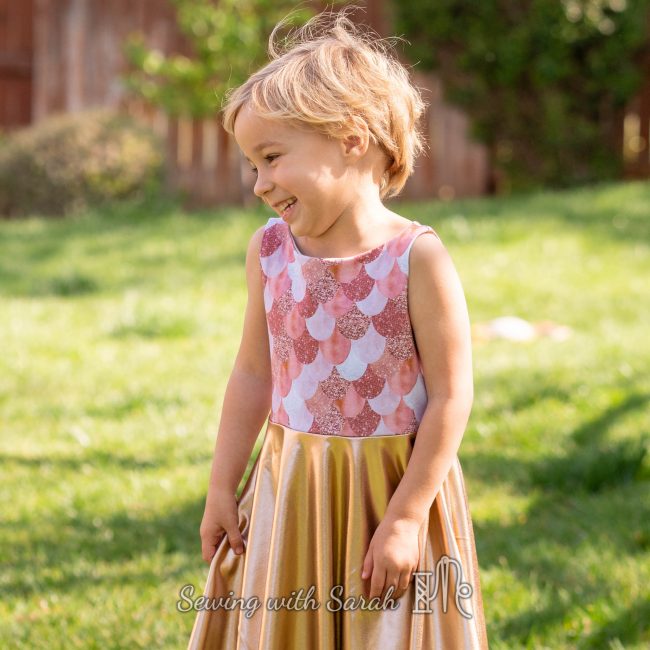 I even managed to find a few minutes to whip up a little Easter Dress for Sophia- I always wait until the last minute to remember to do this, so I can’t really blame it on anything other than my own tendency toward procrastination. It was totally worth the late night though, to see her delight at her “mermaid dress”. 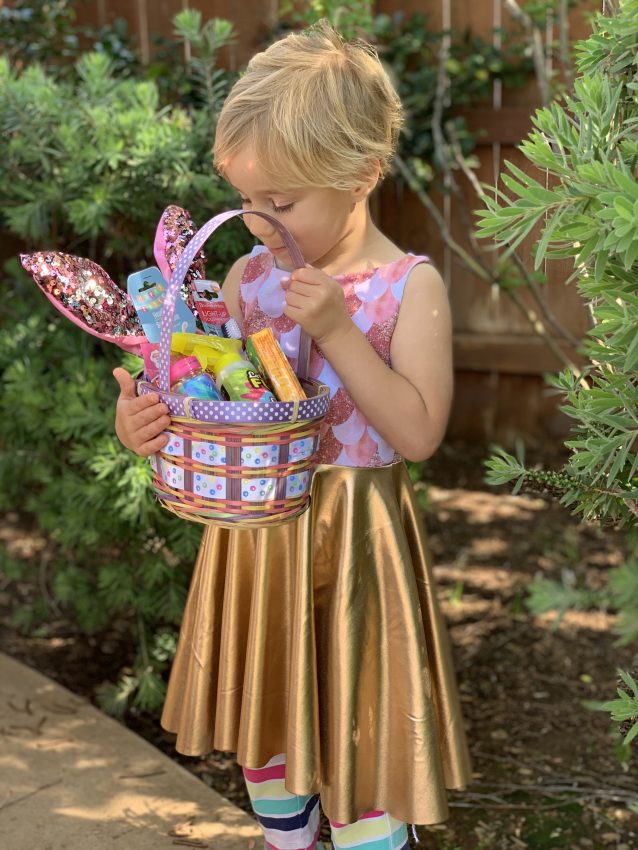 The pattern is the New Horizons Manhattan dress, and I used the fully lined option, which is finished beautifully (and quickly!) with the burrito method. The gold athletic fabric that I used for the skirt was a gift from Angelyn (the designer behind Greenstyle Creations), and while I had originally intended to make leggings with it (because who doesn’t need a pair of shiny gold pants?!) the joy I knew it would garner from my princess-obsessed four year old was enough to redirect it’s future into a very twirl-worthy Easter frock. 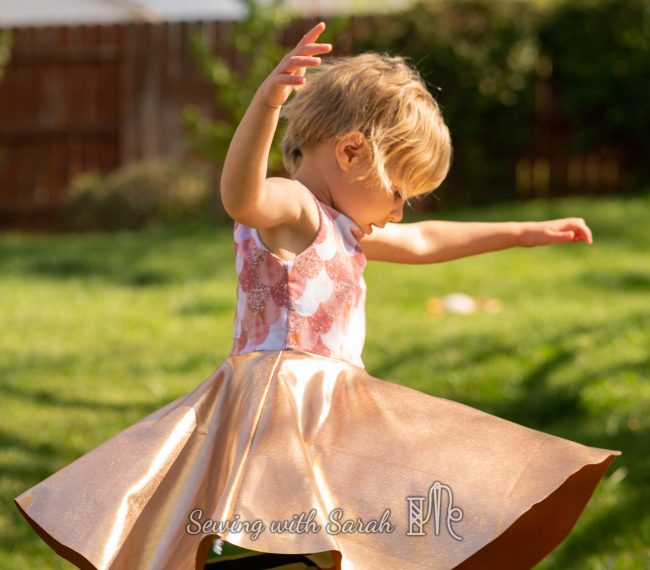 In the afternoon, Daddy took the kids out for some hiking time, while I stayed indoors and worked on packing my sewing room. 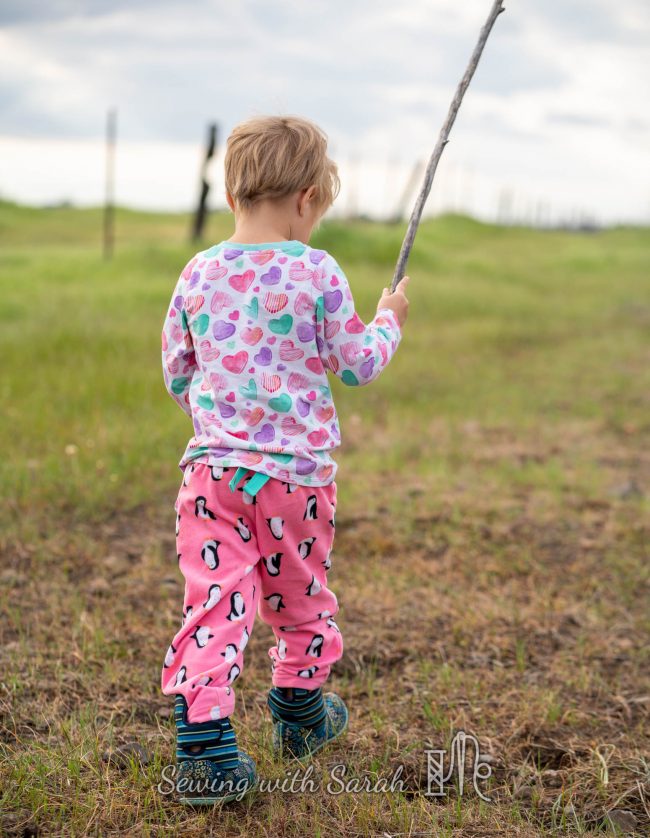 It’s been one of those moving tasks that was really overwhelming for me, so it felt incredibly good to get going on it. It was also fun to see all those fabrics that I had “forgotten” I had- going forward, I may decide to keep a part of my stash boxed (ie the winter fabrics, during warmer months), so that I can better appreciate the options I do have. 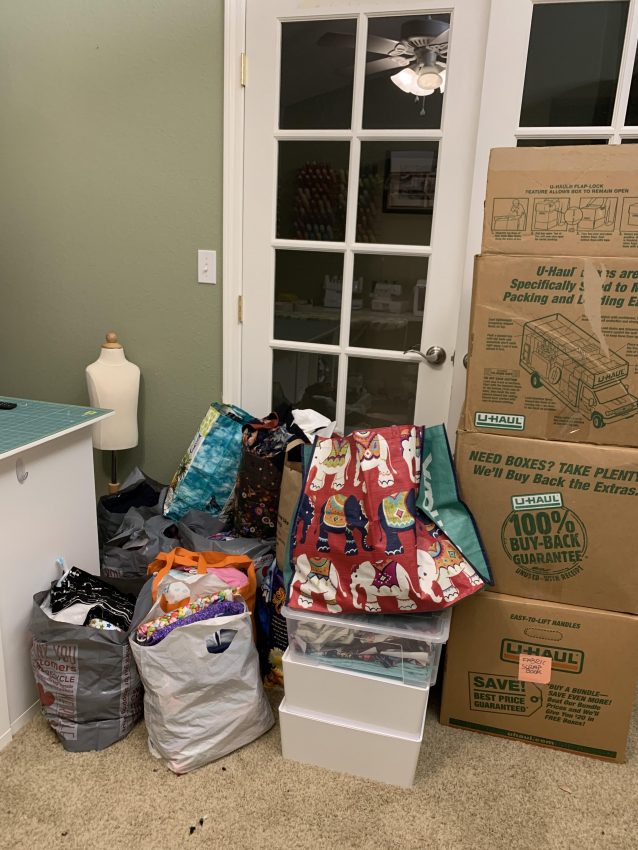 This would also keep me from ordering the same fabric multiple times- somehow I ended up with 3 separate 2 yard cuts of heathered grey bamboo! This stack represents all my fabric, including my scraps- it’s about 10 grocery bags and 3 large U haul boxes worth (scraps are in the smaller white and clear bins). I did “destash” about 3 giant trash bags full to a local sewing friend, and it felt good to let it go to a good home, while clearing out my shelves so that I can use what I want to keep.

As another nod to spring, I sewed up this Jalie Michelle tank this week, using this stretch woven fabric from the Fabric Fairy. 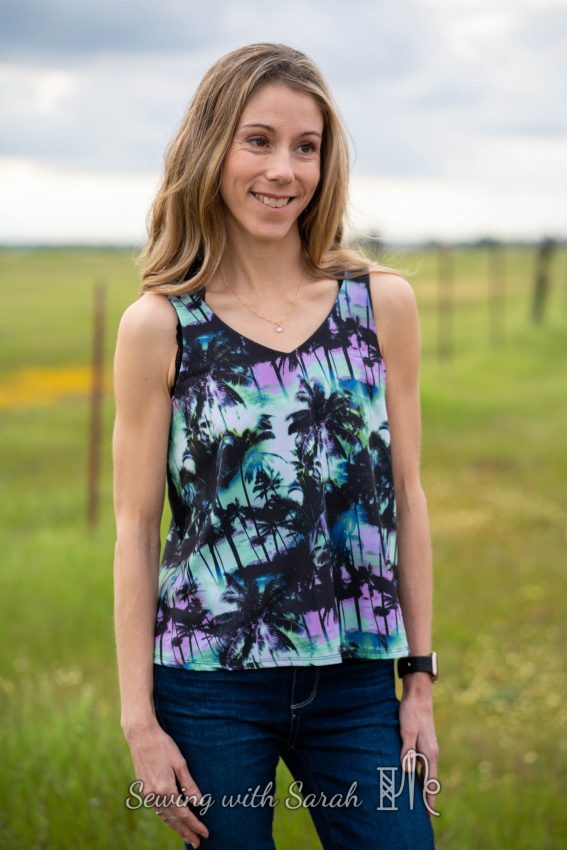 If you haven’t worked with her stretch woven before, I can say you’re in for a treat- its got a beautiful drape and hand, reminiscent of silk, but much easier to handle. It presses well, sews without getting sucked under the presser foot (I use a 75/11 standard or stretch needle), and washes up very nicely. I usually tend toward lightweight athletic bottoms when sewing with stretch woven (like the Moxi shorts– catch the SewAlong for that HERE), but this time I wanted to try something different, so I grabbed the Jalie Michelle and set to work.

The Michelle is a loose fitting tank or tank dress with options for a full lining or a facing finish- I chose the tank view, with the full lining, and altered the construction slightly so I could make it reversible (the lining is stretch woven in black). With the fully lined tank, there is only one pattern piece to trace, and construction is incredibly simple. (Bonus: It took less than a yard of fabric!) 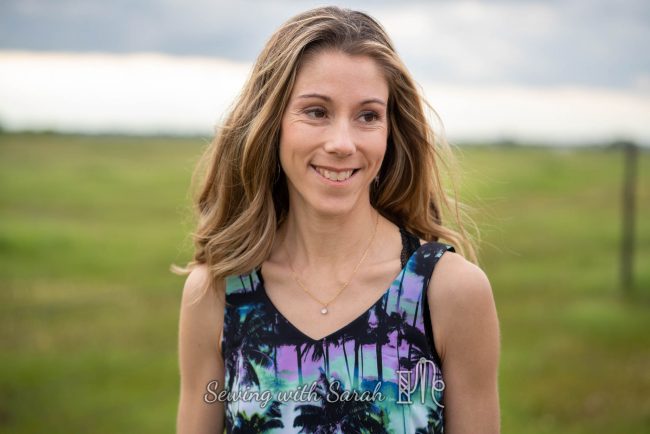 Jalie directs you to do a french seam, but I decided this was too much work (we’re at the eating frozen pizza off paper plates stage of moving, here), so I simply followed the same steps I used for the “burrito” method in Sophia’s dress bodice above, and within an hour, I had new favorite tank!

I even hemmed it with my coverstitch (differential feed set to 1), which made it even faster!

I had initially dithered about whether to use the Victory Tank by Chalk and Notch instead, and while I’m certain I’ll make that one up soon (love those little cross front straps!), I really appreciated the simplicity and fast construction of the Michelle tank. In fact, while I was packing up the sewing room, I set aside a couple cuts of wovens I had forgotten about to make into more Michelle tanks, for those times when I need a really fast sew to give myself a little break from all the moving monotony. 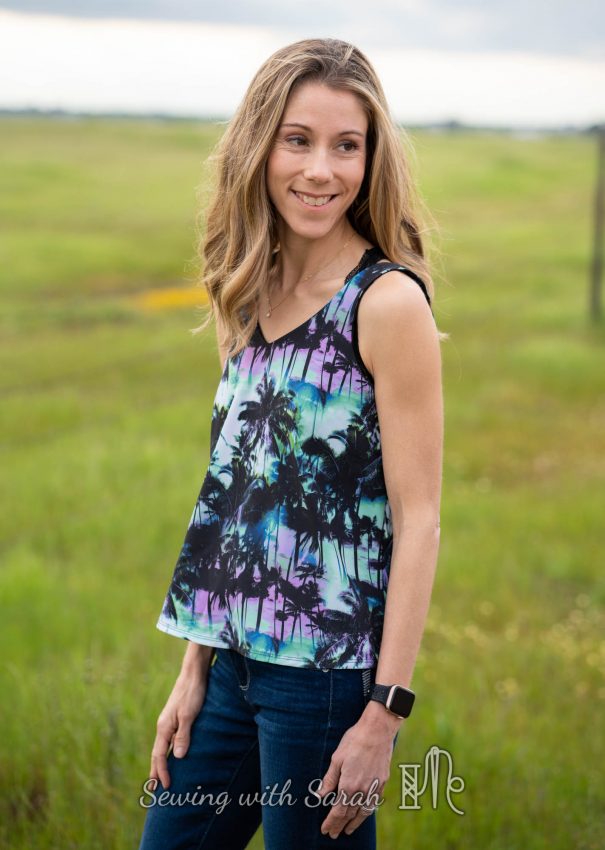 The silhouette is just ever so slightly swingy (so I’d only recommend this pattern for fabrics with drape, like stretch woven, rayon challis, etc), and the V is just the right depth- flattering, but not at all showy. The underarm curve also hits at a nice height- some tanks are so low you risk exposing too much bra if you lift up your arms, and I didn’t find this to be an issue at all with the Michelle. 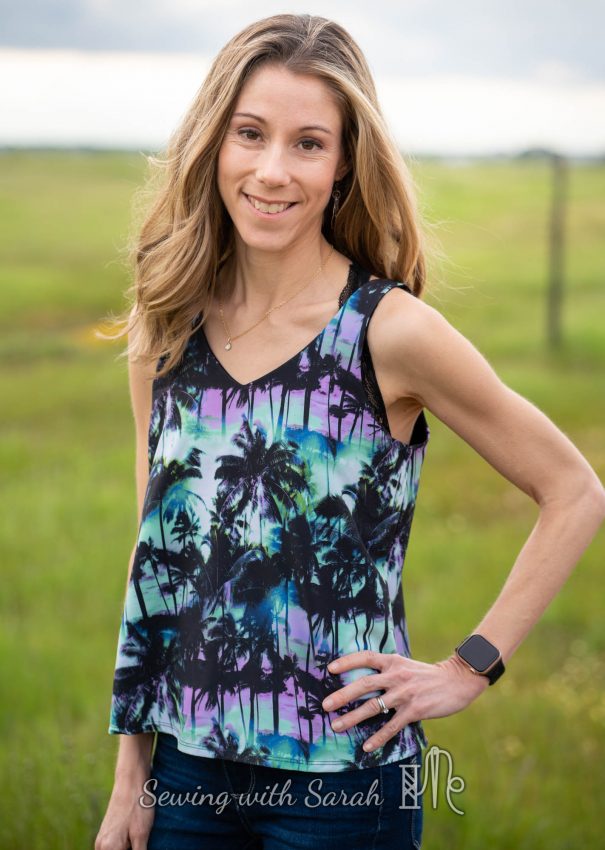 Since the same pattern piece is used for the back, you get a nice V back there as well.  Plus, this print reminds me of the beach (which is pretty much my favorite place, ever), so I’m going to wear it in honor of our plans to enjoy some time on the sand as soon as it’s safe to travel again. 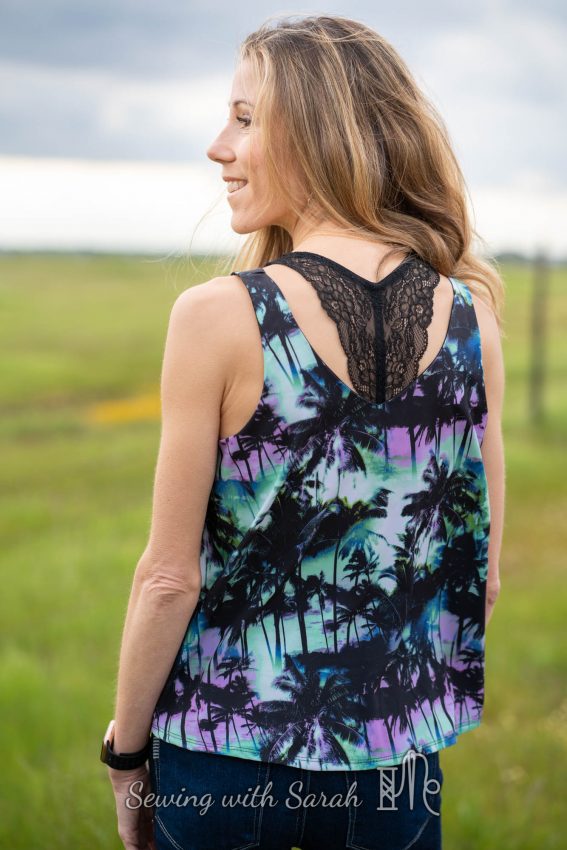 The only change I would make next time would be to lengthen it slightly- I think it is cute as-is over a pair of high waisted jeans, but if I’m wearing leggings or lower waisted shorts, I might enjoy a bit more coverage for those times when I need to toss a kid up in the air, or something.

I hope you had a wonderful Easter as well, and made some new traditions and memories. 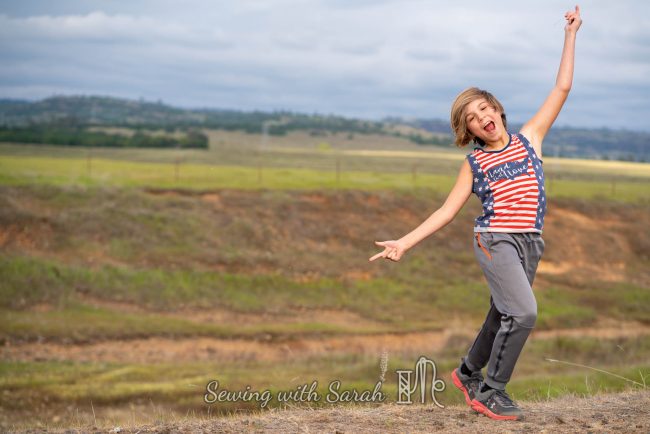 It’s a crazy time with all this social distancing, but as the kids are always showing me, there’s still plenty of fun to be had here at home. 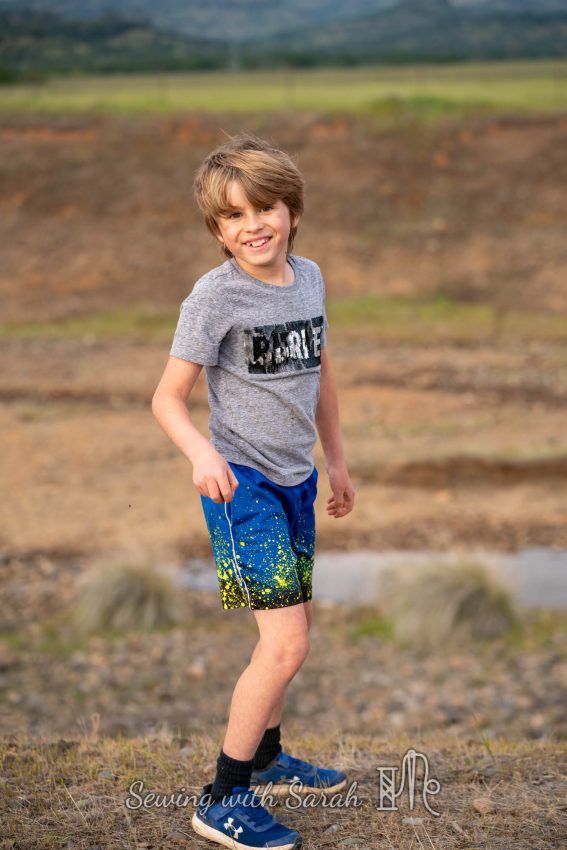 I have no idea what this guy was doing, but his expressions always make me laugh. 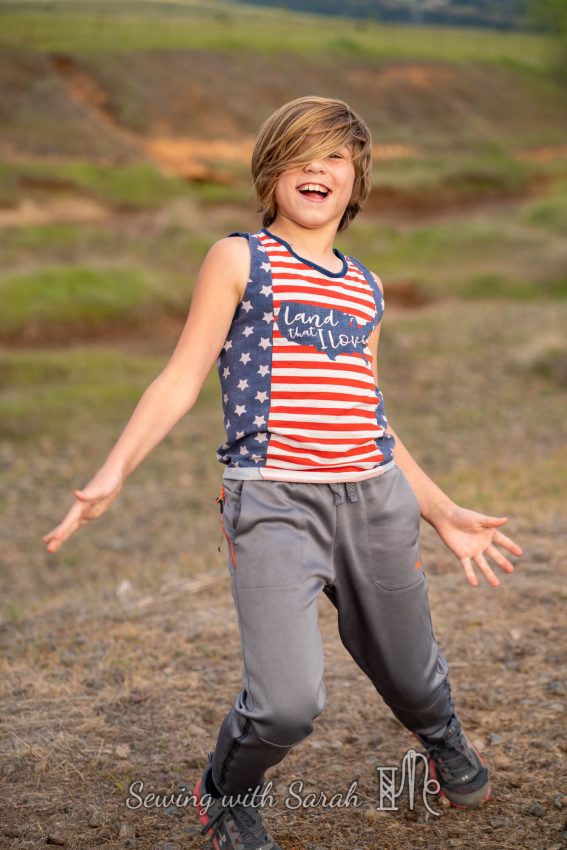