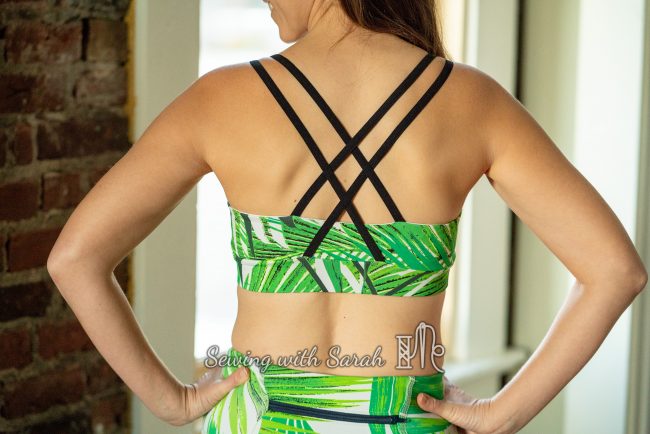 I used to LOVE (love love!) Zumba, and one of my favorite songs to dance to was the Black Eyed Peas “Boom Boom Pow”. Every time that song came on, I could feel myself transforming into an amazing hip hop dance/song artist, with a whole crew (the class) behind me as my backup, as we pounded those beats into the floor.

Ok, clearly this was just a fantasy- a quick look in the mirror would reveal me awkwardly trying to maneuver my feet and arms into the same motions as the much more coordinated instructor, as she gyrated to the song in her matching sports bra and tights, showing off her perfect six pack as she moved to the beat.

Now that I’m in my (late-gasp!) 30s, I’ve accepted that I’ll never be in the same echelon of cool as my prior Zumba instructors, but thanks to the new Power Sports Bra from Greenstyle, I can still look awesome in a fully coordinated sports bra/tights/tank ensemble!

What’s so speical about this new bra that it’s got me reminiscing about the “good ol’ Zumba days”?

The Power Bra is a gamechanger in my world of self sewn athletic wear, because not only does it have a dozen (really cute!) style options, but it also has an inclusive range that goes down far enough for me (I’m at a 30A, but the pattern ranges from a 28A up to a 46H), is nursing friendly (via the “over the top” or “nursing hook” method)- and its the perfect scrab-buster! 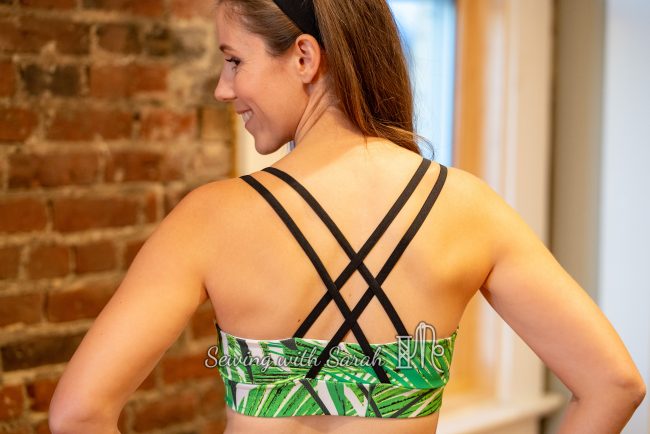 During my first dive into my athletic scrap bin, I came up with a few scraps leftover from my Tropical Print Inspire Leggings– just enough to eek out a strappy back version, if I used read-made silicone backed bra strapping. (find the Inspire Leggings pattern here) 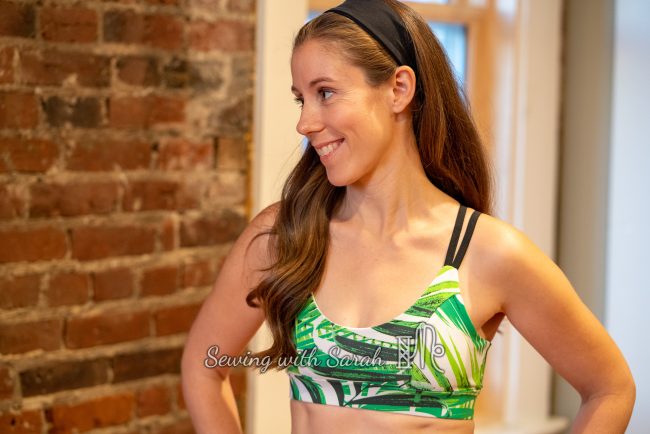 This little “hack” cuts down on the fabric needs and production time of the bra, and the silicone on the back really holds the straps in place during activity (I tested this set on a HIIT run this week just to make sure!). The lining is white supplex from The Fabric Fairy, and the main fabric is from Surge.

The best patterns are the ones you make (happily) multiple times during testing, and I wasn’t anywhere near done after my first Power Bra, so I dove back into that bin and came up with this precious scrap of floral athletic from So Sew English– which was leftover from these leggings). 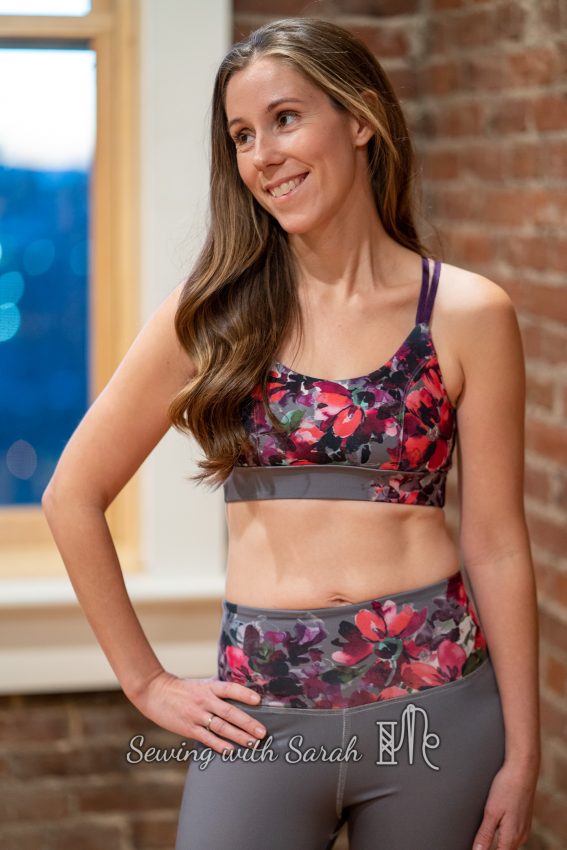 I love this fabric more than pretty much anything else in my stash, so you know this pattern has GOT to be good if I’m using up precious remnants on it. 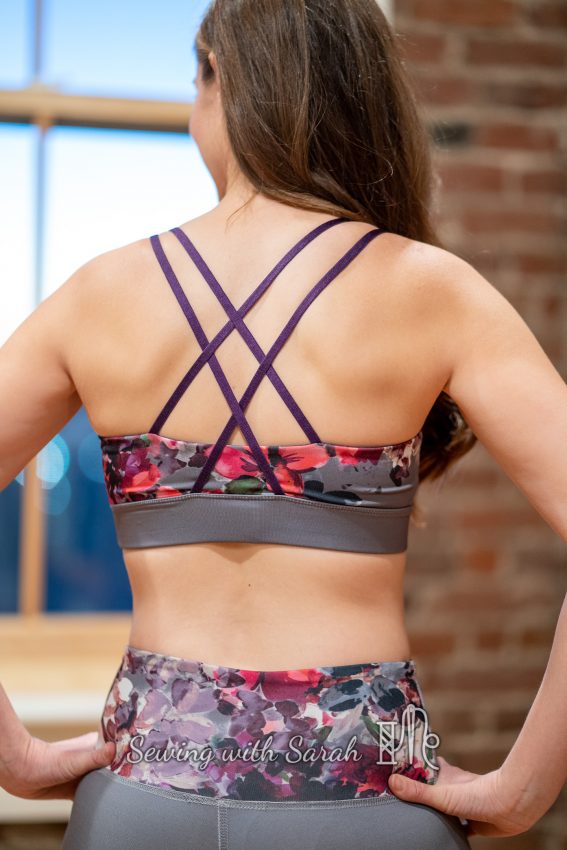 Again, I used ready made bra strapping, tightening the straps a bit over my first version for a bit more security and compression. 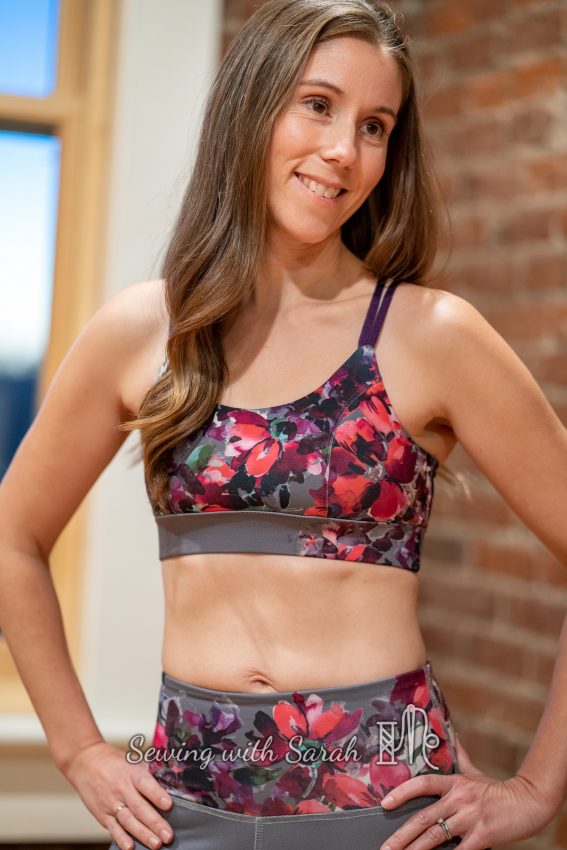 On my third and final (for now!) bra, I decided to try out the strappy U-Back, and add in a layer of powermesh. All powermesh is NOT created equal, and I’m highly partial to the stuff Fabric Fairy sells- its soft enough to be worn against my skin, has great stretch, and comes in a couple basic colors. 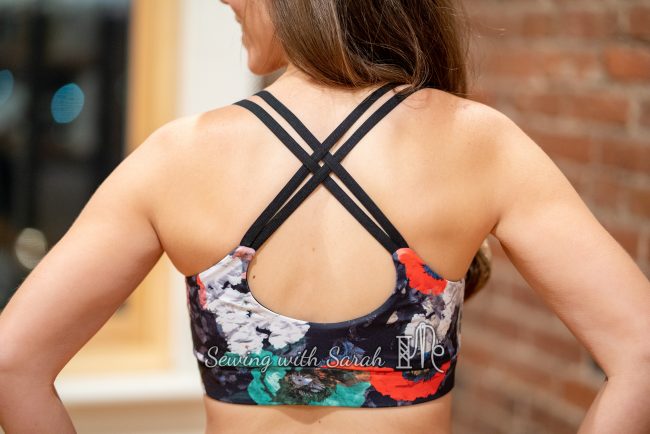 I decided to baste my powermesh to the lining, and then moved forward, treating my lining and mesh as one piece during the construction. I used the same bra strapping as in my first bra, but upped the support ante again with clear elastic in all the edges. (Pro tip: Make sure you add it to the wrong side of the MAIN fabric, rather than the lining. I like to do one pass attaching the main to the lining with my serger, and then zig zag the clear elastic over the top.). Fabric Fairy also carries clear elastic, and I like the 1/4″ size best for the edges (but I find 3/8″ easiest for making your own straps). 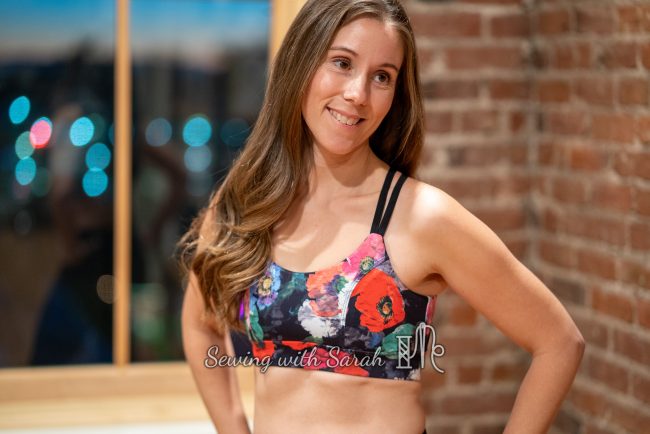 This bra turned out to be super supportive- I could run a marathon and do a dozen burpees in this thing, and my “girls” wouldn’t be bouncing around at all. One thing to note about the Power Bra is how its cut nicely down around the underarm, eliminating chafing that I sometimes get with bras that are higher cut there. If you have a larger cup size, there is a more generous coverage option, though, to prevent too much “side boob” and improve the support. 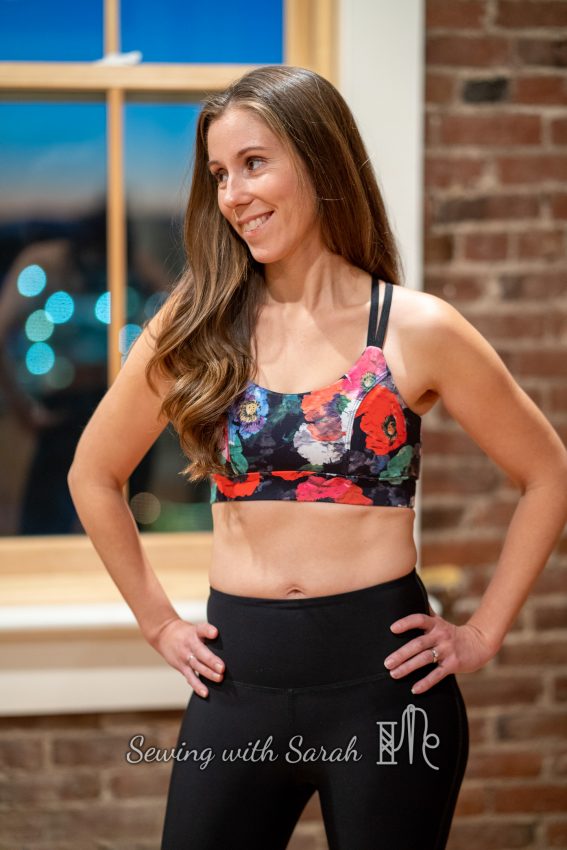 While making (and wearing) self sewn sports bras is empowering, taking photos of them is not. This photoshoot tested my patience and self confidence, and its a little nerve wracking putting these photos out there. This is an unfortunate side effect of our society’s unrealistic messaging to women, and I only mention it so that we stay vigilant in keeping those messages in check. So, if you see a photo of a woman sporting this bra, make sure to give her a high five and tell her she’s a rockstar. Because anyone who makes this bra has the POWER, and needs to be feelin’ it!

Now, if you know me well enough, you know that I’m always scheming on my next SewAlong- and I’m happy to announce that I’m planning on doing one for the Power Bra in January over in the Fabric Fairy Group!

Make sure you’re subscribed to my YouTube Channel and a member of both Greenstyle and the Fabric Fairy, so you get the jump on all the info as it comes! There’s never any price better than the release price though, so snap it up today!