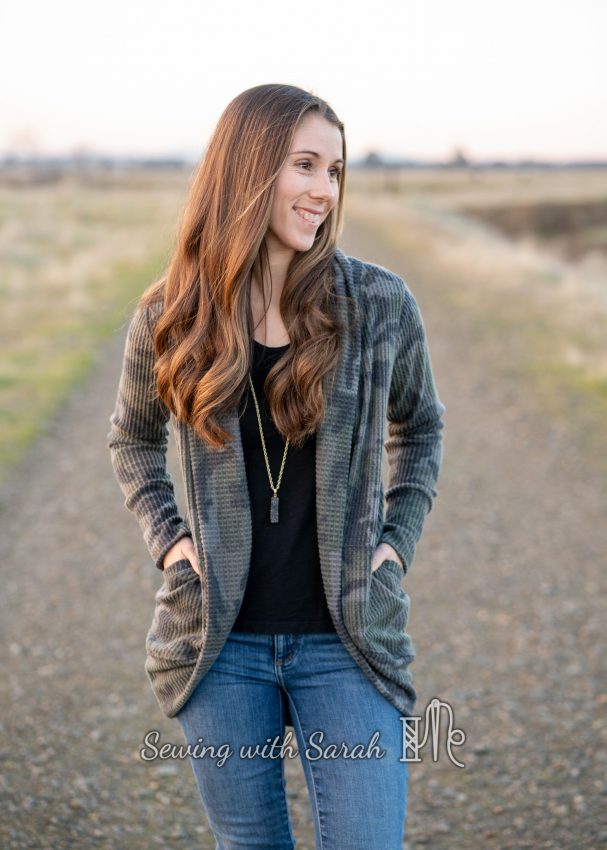 I used to be such a girly girl…as in I would ONLY wear shades of pink and purple as a child, with the frilliest accessories possible. I cried when they fingerprinted me because I didn’t like my hands to get “dirty”, and I played with dolls until I could drive a car (in secret with my BFF, of course).

And yet, here I am, in camo- again (see my other family camo pics here!). I don’t know what happened! Maybe I’ve been influenced by my predominantly male household, but I’ve really found the love for this swirly grey/green/black combo, and never more so than when I saw the brushed waffle knit at So Sew English while I was on holiday. 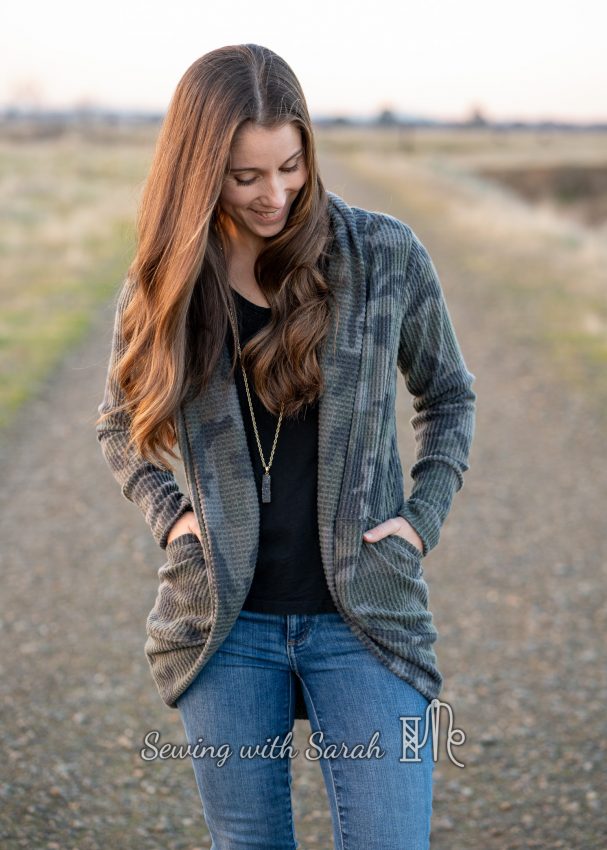 I couldn’t imagine a more cozy use for the fabric than to make a Cocoon Cardigan, and so that’s what I did! I modified the bands to be 10″ tall, and used the shoulder/sleeves from the Henley to get a set in, rather than dolman sleeve. Boom. Cozy perfection in less than two hours.

I’ve seriously worn this thing so many times since it was made, and just finally worked up the energy to write up a blog post about it- it kept me cozy the entire time I was filming the Power Bra SewAlong, and looks pretty awesome with the new pleather leggings I made myself the other day (I’ll be sharing those soon!). 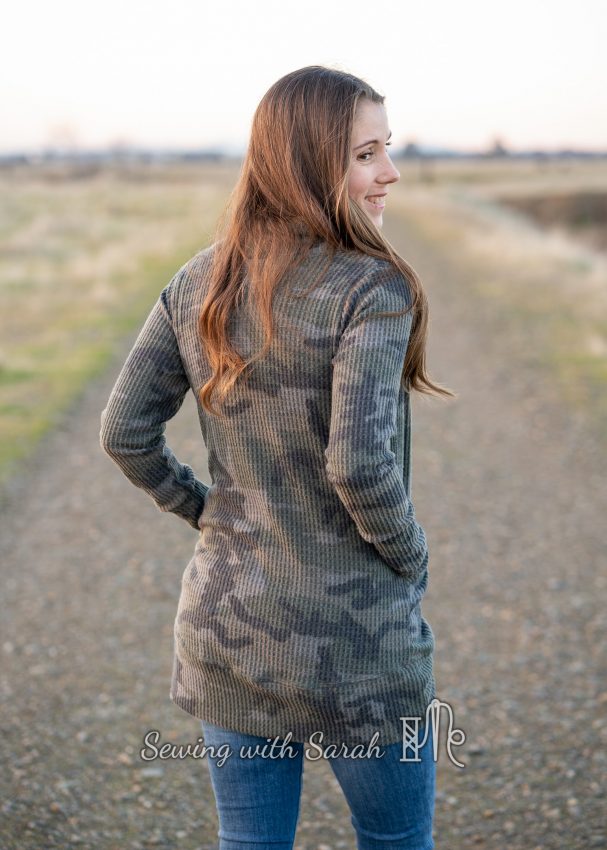 In fact, as soon as my boys felt this camo cloud of fabric, they gave me their best “puppy dog faces”, and begged for something of their own, so I gathered my scraps, and eeked out a couple Jalie tees for them using the waffle for the sleeves. 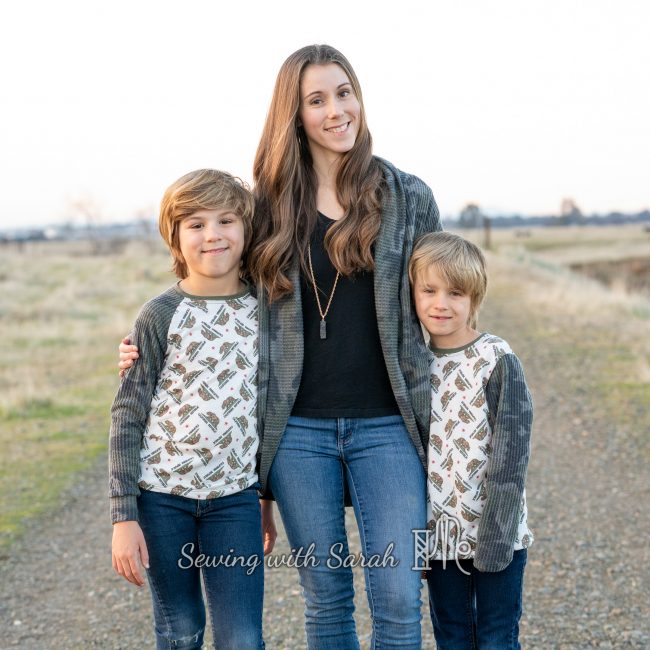 The main fabric is the California Bear Print, and it holds a dear place in my heart, as it as only three months ago that the skies you see in these photos were black with smoke, the air was unbreathable, and the Camp Fire raged two miles from our home. We were incredibly fortunate to remain safe, but so many of our friends and schoolmates were not, and there are still thousands that remain homeless. The sale of this fabric goes toward purchasing things these families need, and I really admire the folks at So Sew English for finding a concrete, meaningful and awesome way to help the fire victims.

As always, it’s like raking them over hot coals to get them to pose together…but they did it for the cause! Also, because mama made them. #photographerkidproblems 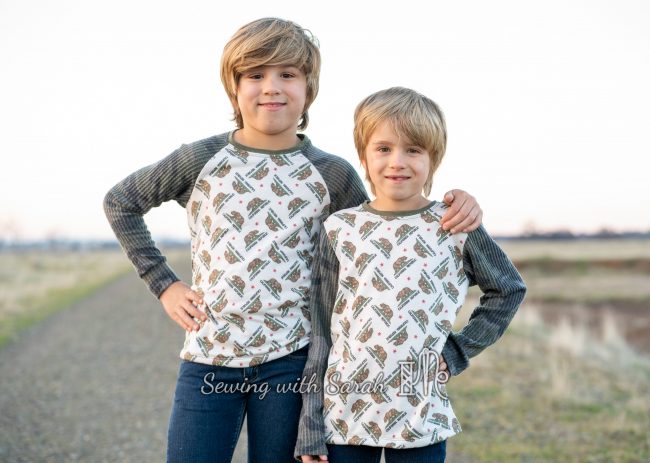 My boys love their tees, and I still have a couple yards of bears left over for a pair of Portlanders. I’ll wear them with pride (and probably with my camo waffle cardigan).

Because this girl ain’t giving up her camo any time soon (just don’t ask me to go hunting…because I still don’t like getting dirty.)

Unless, of course, it’s to this baby, who stole the cardigan as soon as the shutter was done clicking…. 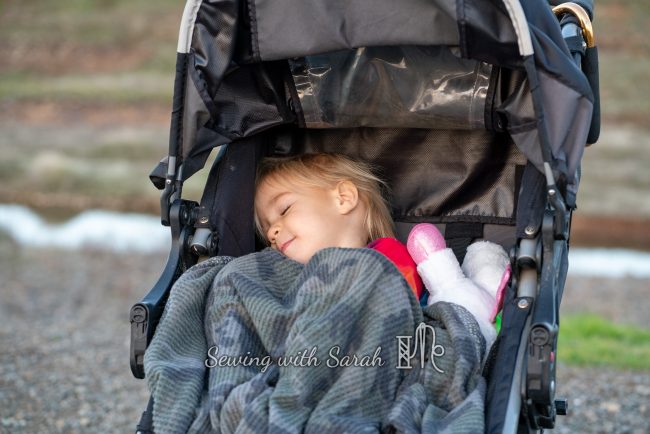 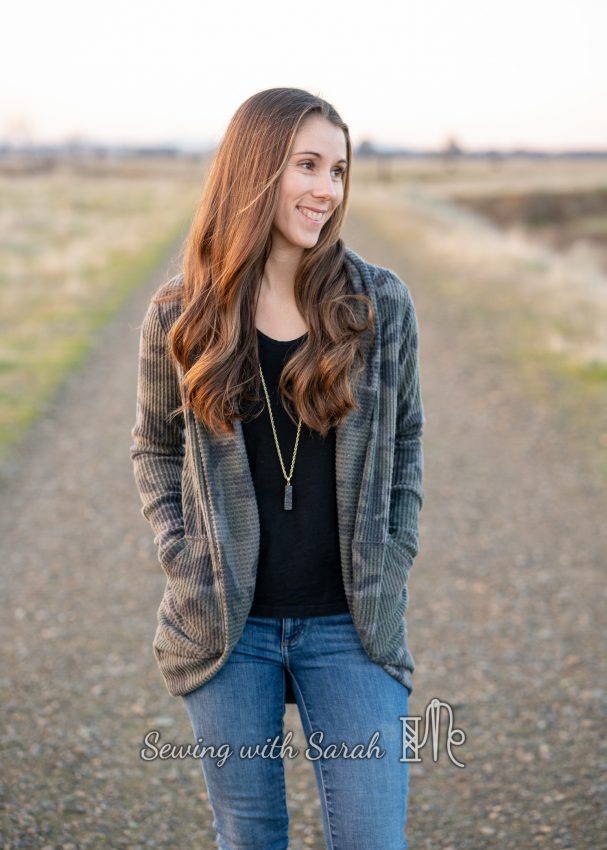